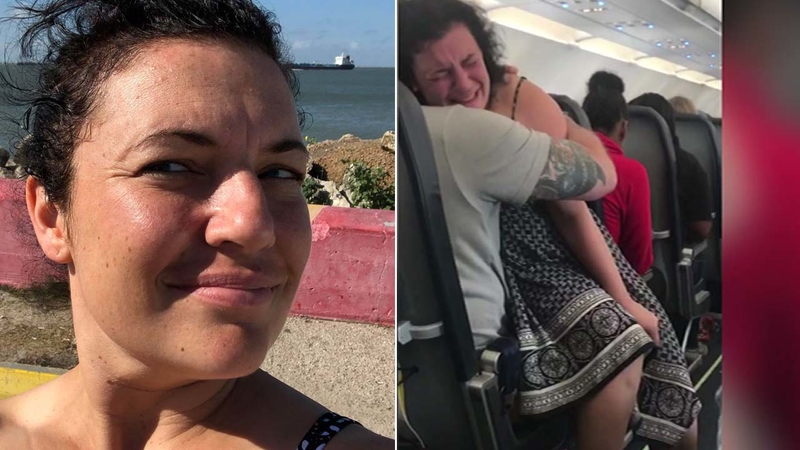 Woman behind viral Spirit outburst shares what caused her meltdown

HOUSTON, Texas (KTRK) -- The woman at the center of a viral outburst on a Spirit Airlines flight from Houston is sharing her side of the story.

Theresa Krippner was recorded Monday pacing up the aisle of the plane, screaming hysterically.

"Get me the f*** off this (long string of expletives) plane!" Krippner is heard screaming in eyewitness video. "You want to be (expletive) and b**chy to me? You'll see me f***ing pissed."

Krippner, a military veteran, told ABC13 that she was in College Station visiting a friend prior to the flight out of Houston. The flight to Minneapolis was her first time flying in 17 years since leaving the military.

Woman at center of expletive outburst on Spirit flight shares her story.

She says she suffered emotional issues while in the military, which contributed to her PTSD and the outburst on the Spirit flight.

In an exclusive interview, she said a flight attendant blocked her path to the bathroom.

"Instead of moving he decided to leave one foot in the aisle," she said.

As the flight continued, Krippner said the plane was forced to make an emergency landing due to another passenger having a medical episode.

According to Krippner, the flight attendant continued to berate herself and another passenger.

At this point, she got up and walked down the aisle.

"I got up and walked down the aisle and peed my pants all the way down the aisle," Krippner said. "The people were shooing me, booing me, and it looked like a couple of them were scared of me."

She says the flight staff then contacted security.

"By that time, I was mad because when I cry I get mad and scared and angry," she said.

Krippner says she was met by a police officer at the door, waiting to assist her off the plane.

"I did not want to get to that level of panicking," she said in between tears.

In regards to the entire incident, Krippner says that she wants to forget about the entire ordeal.

"If I caused any alarming, it's because I was alarmed myself. I just hope that everybody is safe," she added.