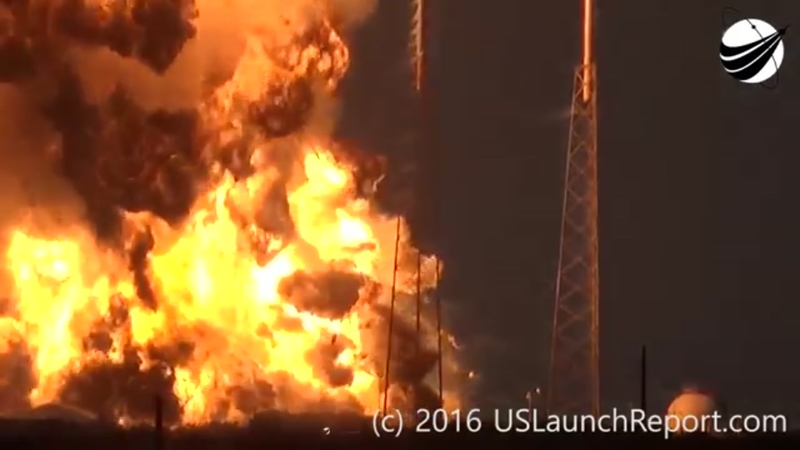 A SpaceX rocket exploded this morning in a test at Cape Canaveral, Florida

SpaceX was conducting a test firing of its unmanned rocket when the blast occurred shortly after 9 a.m., according to NASA. The test was in advance of a planned Saturday launch from Cape Canaveral Air Force Station, which is next to NASA's Kennedy Space Center.

"SpaceX can confirm that in preparation for today's static fire, there was an anomaly on the pad resulting in the loss of the vehicle and its payload. Per standard procedure, the pad was clear and there were no injuries," the company said.


Buildings several miles away shook from the blast, and multiple explosions continued for several minutes. Dark smoke filled the overcast sky. A half-hour later, a black cloud hung low across the eastern horizon.

Launch Complex 40 at Kennedy Space Center has a long history. It was first used in 1965 and leased to Space X in 2007. Two years later, in advance of the first Space X launch, our own Ted Oberg toured the facility. Much of what we saw under construction in 2009 was destroyed in today's explosion.

ABC News has confirmed with emergency management officials who say there were no injuries in the blast. The launch pad usually is cleared before a test firing of a SpaceX Falcon rocket.

SpaceX spokesman, John Taylor, said he could not comment as he worked to gather information.
NASA - SpaceX's major customer - said the explosion occurred at Launch Complex 40 at the Air Force station, and Kennedy emergency staff was on standby. At the same time, personnel were monitoring the air for any toxic fumes.

The rocket was supposed to hoist an Israeli communications satellite this weekend.

There is NO threat to general public from catastrophic abort during static test fire at SpaceX launch pad at CCAFS this morning.

The initial blast sounded like lightning, but was followed by the sounds of more explosions. SpaceX is one of two companies shipping supplies to the space station for NASA. It's also working on a crew capsule to ferry station U.S. astronauts; that first flight was supposed to come as early as next year.

Two NASA astronauts were conducting a spacewalk 250 miles up, outside the International Space Station, when the explosion occurred. Mission Control did not immediately advise them of the accident.

The explosion is a setback for SpaceX. The California-based company, led by billionaire Elon Musk, had been ramping up with frequent launches to make up for a backlog created by a launch accident in June 2015. SpaceX was leasing the pad from the Air Force for its Falcon launches.