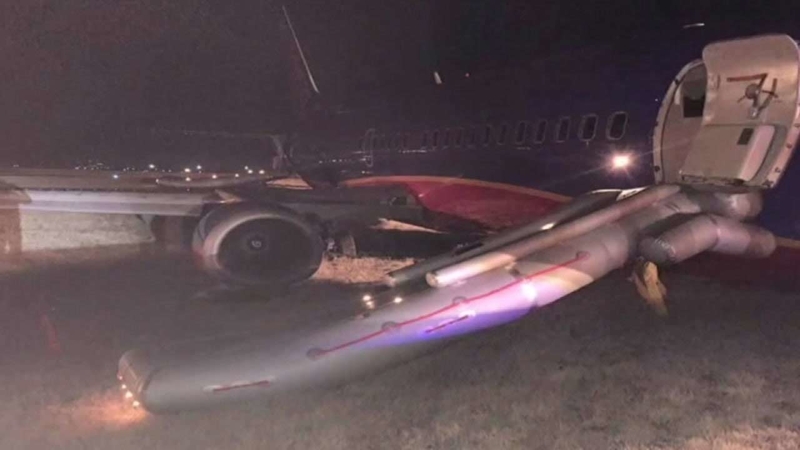 HOUSTON (KTRK) -- As a frequent flyer, Sarah Brann knows flying in a plane is safer than riding in a car.

Her experience on Southwest Airlines 31 Tuesday night will forever change that logic.

"I guess the wheel broke, the nose gave out, and we lost control and flew off the runway," Brann said. "It was right after we landed, so it wasn't like we had slowed down to a normal taxiing speed. We were still going very fast."

The plane slid off the runway into a ditch after it landed in Nashville Tuesday night.

"And then the whole right wing was resting on land," Brann said. "Everyone started screaming, the flight attendants said, 'Leave all your stuff, get off the plane right now.'"

Flight attendants opened up two exits at the front and back of the plane, and passengers slid down inflatable slides to escape.

"It was very slippery, you'd think there's bumpers, they're very small, kind of the height of the center of the slide," Brann said, "And the slide was thinner than I thought. You never think you're gonna go down a slide on an airplane."

Brann said she actually fell off the slide and suffered minor bruises.

"There were some people who were injured that needed immediate attention. But the police were the first on the scene, they were trying to calm us all down, they had megaphones," Brann said.

Brann was on her way to Tampa for a work trip but ended up flying back home to Houston after Tuesday night's close call. She is still pretty uneasy.

Flying will still be a part of Brann's weekly routine, but now she's much more aware of the risk we all take - however small - as we step onto airplanes, trusting we'll arrive safely.