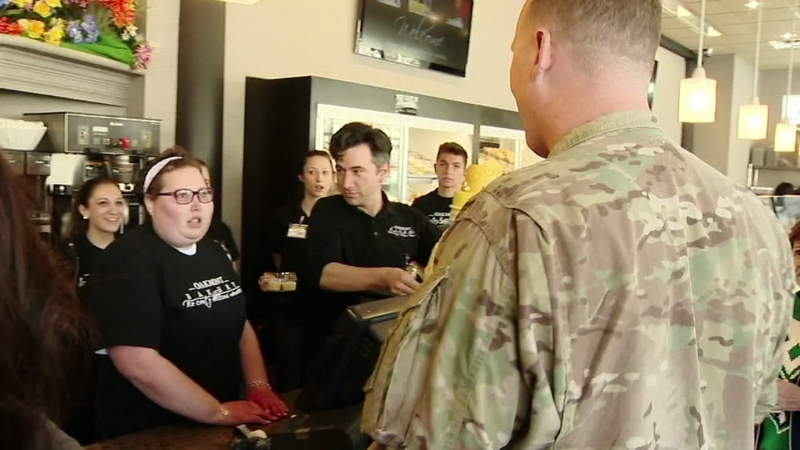 Soldier surprises sister with cancer with trip to Disney World

PITTSBURGH, PA (KTRK) -- A cancer patient got a double surprise this weekend.

First, she saw her brother who serves in the military. Then, she was told she's going to Disney World.

A sunny spring Saturday and the Oakmont Bakery in Pittsburgh is packed.

A grieving mom is praising a Disney character for the touching tribute to her deceased daughter during a recent visit to Disney World.

Mary Pat Siess, 26, is hard at work behind the counter with no idea that her brother, who's stationed at Fort Bragg with the 82nd Airborne, is right next door.

"She has no idea I'm here," says Specialist Robert Siess, "So it will be a hell of a surprise for her."

You see, Mary Pat is a new face among the staff here today.

The avid baker has an aggressive form of leukemia, and she thinks she's here to help bake a cake for a young child with cancer.

"Never heard her complain about it once," Robert Siess says. "Probably the toughest person I ever met in my life and ... about time we did something for her."

So Robert is surprising his sis with a family trip to Disney World.

Nick surprised his little brother Tyler after being away for six months.

Posing as a customer amongst the crowd, he zooms in with the big news.

And his sister greets him with stunned silence. It takes few minutes for everything to sink in.

"I had no idea," Mary Pat says, fighting back tears. "Everybody thought I knew but I had no idea."

Robert Siess says what Jamie's Dream Team has done for his family is "unbelieveable."

"There's no way we could ever thank them," Robert says. "The work they do is just amazing."

And Mary Pat wanted to make sure her work was done before she turned in her apron.

After a few photos, a sheriff's deputy readies the escort caravan, and it's off to the Most Magical Place on Earth.

"This is more than I expected," Mary Pat says. "A lot more."

The Walt Disney Co. is the parent company of Disney Parks and this ABC station.