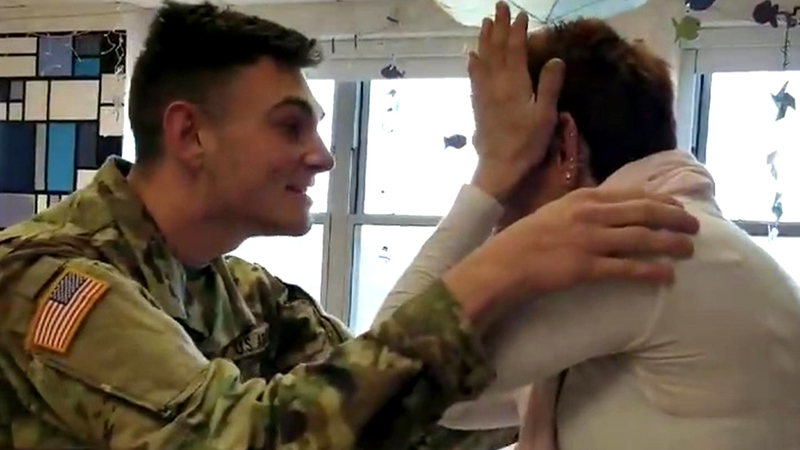 NEW ROCHELLE, New York -- A soldier from New York planned the Christmas surprise of a lifetime, shocking his mom and making for an emotional moment captured on camera.

Dylan McNulty, who is stationed in Arizona for the Army, has been away from home for the last six months. He told his mom, Pat Dilorio, that he wasn't going to be able to make it home for the holidays because he was going on a training exercise.

She had no reason not to believe him, until Tuesday.

Behind the scenes, Dylan had been working with his siblings for months to plot out the surprise. He got in Monday and stayed with his brother, trying to stay off his mom's radar. The big reveal was planned for the next day at the school where Pat works as an art teacher -- The Ursuline School.

With flowers in hand, Dylan, along with his brother Shane and sister Sarah, walked into the school knowing they were about to see their mom's face light up like never before. Sarah was recording the video.

"This is going to be funny," Dylan said as he was walking through the halls. "She's going to freak out."

Sarah knocked on her mom's classroom door first and went inside. That wasn't anything out of the ordinary. Moments later, Dylan knocked.

When Pat opened the door and saw her son, she started screaming with excitement, jumping up and down, and the two embraced.

"Oh my God! How did you get off?" Dilorio asked.

"I've been planning this for three months, and you kept messing it up, Mom! I kept convincing you not to, but you kept looking for flights," Dylan said.

Thankfully, it all worked out and made for a Christmas this family will never forget.