WPVI
By Christie Ileto
VENTNOR, NJ -- Kyle Mosca and Patrick Higbee are strangers bonded by an act of kindness.

Kyle loves Wawa. He's a superfan of the store.

His mom says the 16-year-old has autism and going to Wawa is a daily social experience for him.

Kyle and his family recently stopped in at a Ventnor Wawa where Patrick works.

While ordering, he asked for Patrick's Wawa hat.

It's something you're not supposed to give away, but Patrick did.

"When I handed him the hat, the smile on his face was just so big," Patrick said. "I have an older brother and I knew he was special needs and so I just thought it would be really nice to give him my other hat."

Initially, Patrick thought he would get in trouble for giving away Wawa property.

Instead, it was the opposite.

Kyle's family posted a picture on Facebook of the 16-year-old wearing his new Wawa hat and the story behind it went viral.

Action News was there when Kyle returned Tuesday night to the Wawa, even gifting Patrick with a hat to replace the one he gave to him.

Isabelle, Kyle's twin sister, said it felt like she was going to cry. 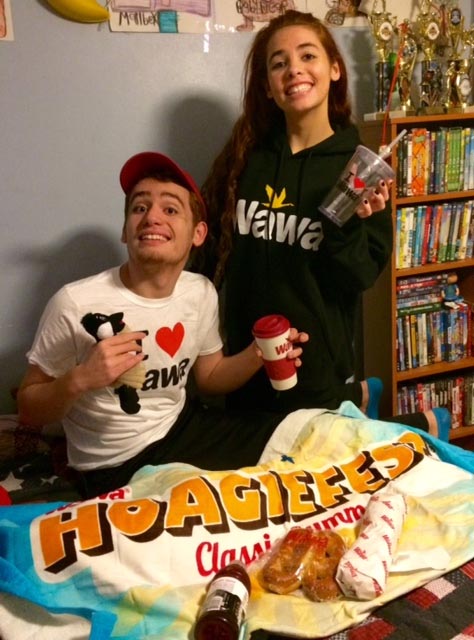 "When somebody else is that nice to him that's not me, it feels like he doesn't even have autism because they're treating him like he's just a normal guy," Isabelle said.

The Wawa assistant general manager Pam Balliet says it was wonderful to see.

"For Patrick to delight one of our customers like that, it was just amazing," Pam said.

"I didn't expect it to do this at all, I expected to just give him the hat and I didn't want anything out of it," Patrick said.

Kyle's family says this Wawa in particular has become his favorite.

As for Patrick, his boss says his random act of kindness just landed him employee of the month.