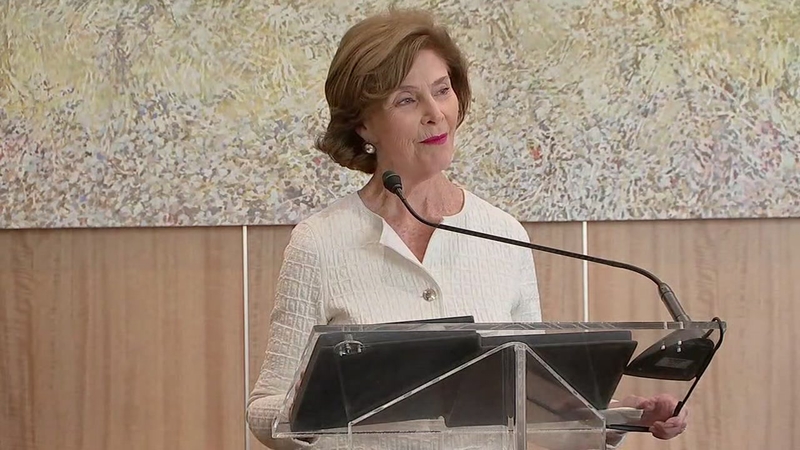 The former first lady was able to visit the 41st president before helping to unveil the opening of the Paula and Joseph C. "Rusty" Walter III Tower on Wednesday afternoon.

George H. W. Bush remains hospitalized as he recovers from an infection following the burial of his wife, Barbara, on April 21.

In her first remarks in Houston since Barbara Bush's funeral, Laura Bush says she and former President George W. Bush were moved by the display of affection from Houstonians after Barbara's death, especially on the day of her funeral.

"We drove to College Station on roads lined by Texans, who would pull over, stop, and put their cowboy hats over their heart," Laura Bush said. "It was really gratifying to see how much respect Texans had for her."

The former first lady said she and her husband have learned much about aging from both Barbara and George H. W. Bush.

"In Maine, Bar walked her dogs on the beach every day. Then a couple of summers ago, she began to walk with a walker, and then last summer she couldn't walk on the beach, so she wildly drove her golf cart around Walker's Point with her little dogs running behind her for exercise," Laura Bush said. "From both of them, George and I have learned is all we know we have is now. So take advantage of your life now, as it is, and walk on the beach every chance you get."

The new Center for Health & Nature will feature a healing garden, and resources to support the healthy, healing and well-being of Houston Methodist patients.