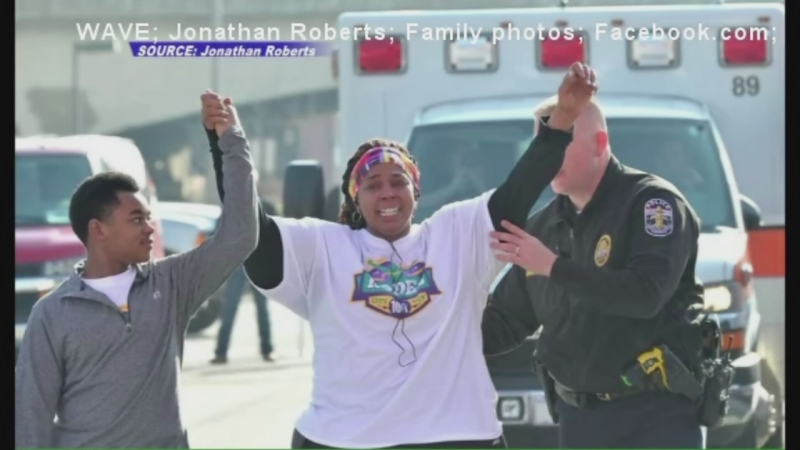 LOUISVILLE, KY -- A photograph from a 10k race in Kentucky is going viral.

It's not of the winner or even a medal ceremony. It shows a woman, determined not to give up, crossing the finish line hand in hand with her son and a police officer -- the two people who kept her going.

Asia Ford once weighed in at 474 pounds she said, but has lost 217 pounds and counting. The mother of three now strives to live a healthy lifestyle, and the Rodes City Run was one step in that journey.

"I just knew that all of those times we went to the doctor's office and the doctor told us what could have happened, I wasn't going to let that happen to me," Ford told WAVE-TV.

Just because Ford was determined to finish the race doesn't mean it was easy.

She described how it felt as she approached the end: "My breath was kind of like, it felt like it was taken from me."

Lt. Aubrey Gregory of the Louisville Metro Police saw that she refused to give up, but he thought she could benefit from some encouragement.

As they walked, Ford, her son Terrance, and Lt. Gregory got to know one another. Before they knew it, the finish line was in sight. They crossed it together, making for an emotional moment and one priceless photo.

"Watching her go across that line, raising her hands, I felt that all over. It was a great moment," Gregory said.

Terrance said he admires his mother and respects Lt. Gregory for stepping in.

"Looking at her and how she used to be and how she is now is inspirational. It makes me want to push harder to do the things that I want to do in life," he said of his mother. And of Gregory: "With all the stuff that's going on now with the police, it's nice to know that there's good people out there."

Of his now viral act of kindness, Lt. Gregory claims he was just doing his job.

"That is what being a police officer is about -- service to others, helping," he said.

His helping hand gave Ford her strength to continue.

"I knew that that was my angel at the time because at Mile Five was where I was going to give up," Ford said. "I could've stopped. That could've been the end of my race, but you didn't allow it."
Related topics:
societyrunningbuzzworthyu.s. & worldgood newsphotocaught on camera
Copyright © 2021 KTRK-TV. All Rights Reserved.
GOOD NEWS
Pasadena mom survives birth scare after fire displaces her family
Why this Texas Rangers pitcher has some rooting against the Astros
True love story: Hurricane Ida evacuees tie the knot in Houston
Teen with 19 foster care placements gets help in time for college
TOP STORIES
1 HPD officer fatally shot, 1 injured while serving warrant
Everything we know about the HPD officer killed on duty
Man accused of killing HPD officer is no stranger to police
Man dies after being shot while driving on Westpark Tollway, HPD says
Fall front moves in late Tuesday bringing cooler temperatures
White House looking into footage of Border Patrol agents on horseback
HPD suffers 5th line-of-duty death in last 16 months
Show More
How neuroengineering is helping people fight addiction in Houston
US launches mass expulsion of Haitian migrants from Texas
Texas doctor who defied state's abortion ban sued for $100K
Dallas-area couple kicked out of restaurant for wearing masks
Couple robbed at gunpoint at their downtown Houston apartment
More TOP STORIES News