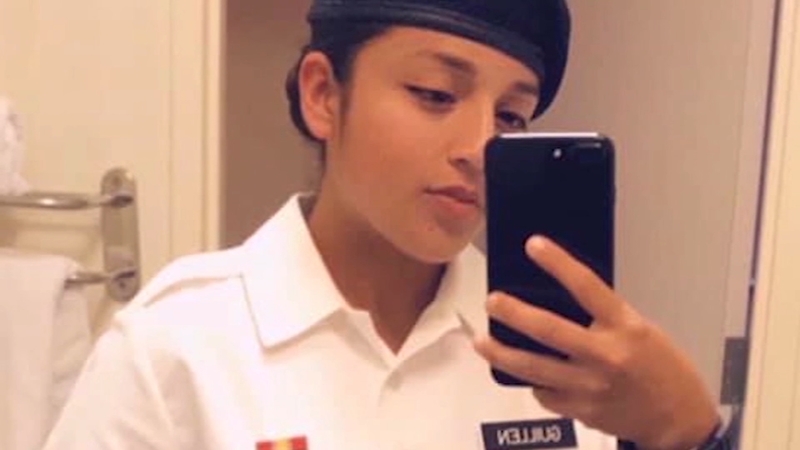 The beloved daughter and sister vanished from Fort Hood in central Texas, and her remains were found 69 days later dismembered and burned. Guillen was bludgeoned to death by Spc. Aaron Robinson, who killed himself on July 1 as police were trying to take him into custody.

As her family faced the heartbreaking anniversary, several events took place around the country and in Houston.

In Washington D.C., California Congresswoman Jackie Speier introduced the I Am Vanessa Guillen Act, which was created to protect military members from sexual assault.

Guillen's family has said that before her disappearance, she confided in them about being sexually harassed on the military base.

Her family wants service leaders to take sexual harassment and sexual assault seriously and hold offenders accountable. They also want victims to be able to share their stories and make a report without consequences or repercussions.

Rep. Sylvia Garcia, who represents the 29th Congressional District where Vanessa is from, spoke at the Capitol.

Today marks one year since Vanessa Guillen’s death. Today I spoke on the House floor about the obligation Congress has to continue fighting so that every member of our armed forces is safe.

This can never happen again.

"Vanessa was one of my constituents before she was transferred to the Fort Hood military base for her Army training. She was a rising star before her life was tragically cut short. As members of Congress, and as a nation, we have the moral obligation to honor Vanessa's memory and in that change it will end violence in our military installations," Garcia said. "Her story has captivated Americans of all backgrounds. It brought much needed attention to sexual assault in the military, and it has led to changes being implemented at Fort Hood and at military bases throughout the world. I will not rest until there is justice for Vanessa Guillen and her family. My thoughts and prayers are with them today."

Her murder led to a national call for accountability. Fourteen leaders at Fort Hood, from the deputy commander down to the squad level, were relieved or suspended after an independent committee's review of the command climate at the post.

Later in the day in Washington, the Guillens and their attorney, Natalie Khawam, held a candlelight vigil at the mural honoring the soldier. They called on every major city, at every mural of Guillen across the country, to have a vigil in her memory.

Houston heeded that call.
The community organization, Team Vanessa, held a vigil at at a mural bearing her name and face on the side of the Taqueria del Sol on Park Place Boulevard. Rep. Garcia flew in, just in time to speak at the vigil.

She stressed that she will continue to push for the I Am Vanessa Guillen bill to be passed.

Meanwhile, a close friend of Vanessa, Tania Moreno, is part of the #TeamVanessa group that has stood by the family's side from the very beginning. Lupe Guillen, Vanessa's sister, joined via FaceTime to thank her family, friends and the community for continuing to support them in the fight for justice.

"Continue to fight in the battle with us, because it's not over," Moreno said. "We haven't given up. I know it's been a long time, but we've got to push through and be patient, together, all of us. We're going to get through it."

An official vigil with the family in Houston is planned for Friday, April 30.

Supporters have been using the week to celebrate Guillen's life, but also to continue to push for change. On Monday afternoon, Fort Hood unveiled a new gate in Guillen's name. The gate leads to the 3rd Cavalry Regiment where she served.

Morales said they have called on Congress to pass the I Am Vanessa Guillen Act for "continued change in the military."

"When a parent entrusts her child to the Armed Forces, they should never have to worry about their safety," she said.

The ABC13 Original "Vanessa Guillen: Remember Her Name is available right now on the ABC13 app wherever you stream. Our Steve Campion is diving into the case like never before with exclusive interviews with the family, search crews and leaders pushing for drastic change in the military.