KGO
CASTRO VALLEY, California -- There's a sweet and unexpected ending to a story about a little girl who had her hearing aids stolen when her school was burglarized.

Seven-year-old Alicia Lyding is deaf and uses hearing aids. While at school, she uses a device called a Phonak, which attaches to her aids and helps her hear her teacher clearly. When her elementary school was burglarized earlier this month, the school-provided Phonak devices were also taken.

One week ago, when ABC7 contacted the county's sheriff's office for information on the burglary, along with another one at a nearby church, Sgt. Ray Kelly jumped into action, offering to pay Alicia a visit in show of the department's support for catching the person who took her Phonak. He and his colleagues rolled up to Alicia's home to surprise her with a ride in a department vehicle, toys and a promise to do everything possible. Alicia was thrilled, especially because her mother, Meghan, says her daughter wants to be a "police girl" when she grows up.

While this could have very well been the end of the story, it was far from over.

“The news lady came to talk to me!” I love ❤️ this book 📚 you drew for me, Alicia! 😊 This deaf 7-year old had her hearing devices stolen & the guy who admitted to doing it...wrote her an apology letter! #amazing ✨ pic.twitter.com/7xOdv0y0Bv

ABC7 received an email from a man on behalf of Phonak's president who just happened to see the story and wanted to offer assistance to Alicia. After discussing a bit about Alicia's needs with her audiologist Dr. Teresa Wilksen, Phonak sent a brand new, state-of-the-art Phonak system to give to Alicia.

Holding the flat disk-like device, Dr. Wilksen explains how the product works well in group settings like school or while at a restaurant.

"It allows a hearing-impaired person to pull out the background noise and hear what they want to listen to," she said.

In addition to the Phonak, the company sent Alicia a plush lion named "Leo" who also wears hearing aids. Alicia clutched Leo tightly to her chest and exclaimed: "Without a Phonak, I couldn't hear...this is the BEST DAY EVER!"

Several days later, Sgt. Kelly said they had caught the suspect. The 19-year-old homeless man not only revealed where he had discarded the Phonak but wrote little Alicia a letter of apology for taking her precious hearing devices!

HAPPIEST ENDING ♥️ Remember the deaf 7-year old girl who had her hearing devices stolen in a burglary? Not only did the @ACSOSheriffs jump in to help but @phonak surprised her BIG today! 📺 4pm @abc7newsbayarea 😊 https://t.co/jWFNYjVC7R pic.twitter.com/F3gj1lVuH2

"He said he was very sorry. He said he took it because he thought it was a radio. He said he would have never stolen it if he knew it belonged to you," said Kelly to Alicia.

In a way, both Sgt. Kelly and Alicia's mom believe there are other lessons possibly learned because of this initially negative incident. 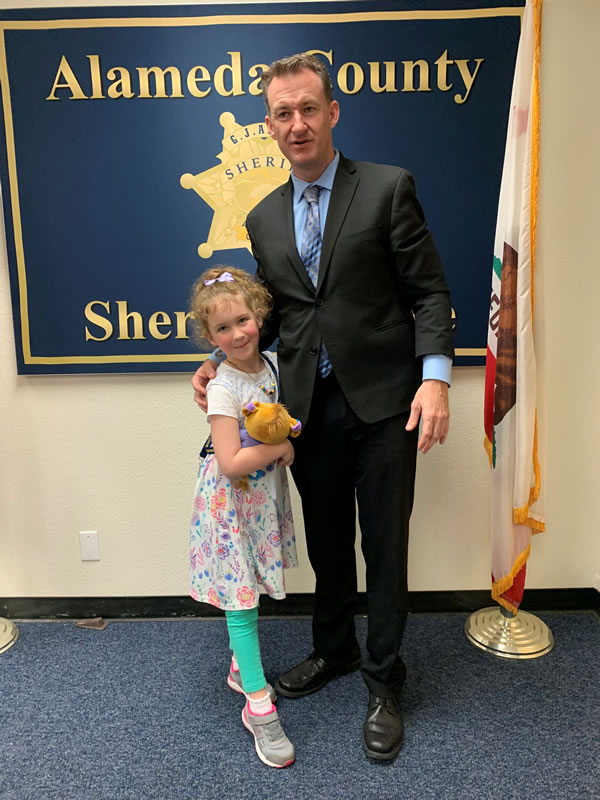 "He admitted to his mistakes and maybe this is a turning point in his life and you made the difference!" smiles Kelly to Alicia.

Her mother, Meghan echoed the sentiment and her extreme gratitude to all who helped make this day special for her daughter.

"Ali has definitely learned you have to make a good choice or there are consequences for people. We are so, so thankful to the community."

Holding up a book she drew, documenting the whole ordeal, Alicia reads to Sgt. Kelly.

"Police found the thief and saved the day!" she beams.