'It's our historical structure': Texas restorer vows to bring life back to Harvey-damaged community with mansion project 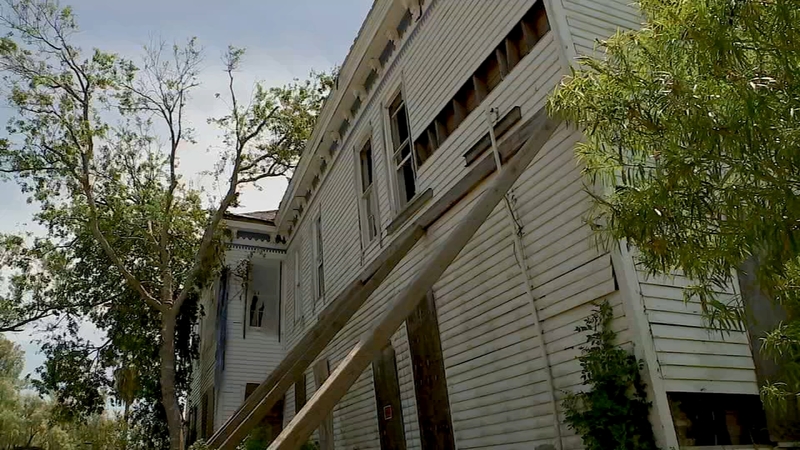 BAYSIDE, Texas (KTRK) -- The ongoing impact of Harvey is still felt in parts of Houston, which was hit with a flood described as being of Biblical proportions. But in a small coastal community in south Texas, about a third of its roughly 300 residents there before the storm, 100 are said to have left.

That's a third of the population of Bayside in Refugio County.

"All we have now is a convenience store and a nursery, but the guy who just reopened it after Harvey repairs died last week," said a resident.

There is one local landmark that still stands after the flood and winds slammed the area.

The John Howland Wood mansion was built by a New Yorker who became a cattle baron.

Wood fought in the Battle of San Jacinto under General Sam Houston.

He built the mansion in 1875, designed in the Greek revival style with towering columns, and added a widow's walk as a homage to his New England roots. It was home to Wood and his wife and their 12 children.

After that, the mansion became a hotel, years later, a commune, and back to being a home again.

The last owner sold the mansion after Harvey. It was damaged and the rear of the home is tilting by several feet.

This is where San Antonio businessman Jon Breeden steps in. He's taking on the revival of the mansion, but not to flip the property. Breeden's business includes home renovation and remodeling.

He has the support of the tiny town, who see it as a landmark on this part of the coast.

"That mansion brought me to Bayside from New York," said one homeowner. "So, in 1975, my husband and I came down for a weekend and stayed for two years."

They later permanently relocated to the town beside Copano Bay.

Breeden said he successfully applied for a grant from the Texas Historical Commission, which will provide $250,000 toward the restoration. He estimates it will require $2 million to repair the mansion.

"A developer would probably tear this down," said Breeden. "Restoring it would bring life back to the community."

A cable system to stabilize the structure has been installed. Some of the original fireplaces have crumbled because of the tilted foundation. Yet, the original long leaf pine and old growth cypress throughout the house are intact, building blocks for a new life for the mansion.

His plans envision the first floor as a community meeting place, a museum and a room for the local historical society, while upstairs would be renovated as Airbnb accommodation for visitors, in search of solitude and gulf breezes.

The Wood mansion is on both the Texas and national historic registers.

The town and the owner hope philanthropists who value preserving the past to inform the future will donate to the cause, so the renovations can be covered.

A GoFundMe account has been set up for donations under the name Bayside Historical Society Restoration Project.