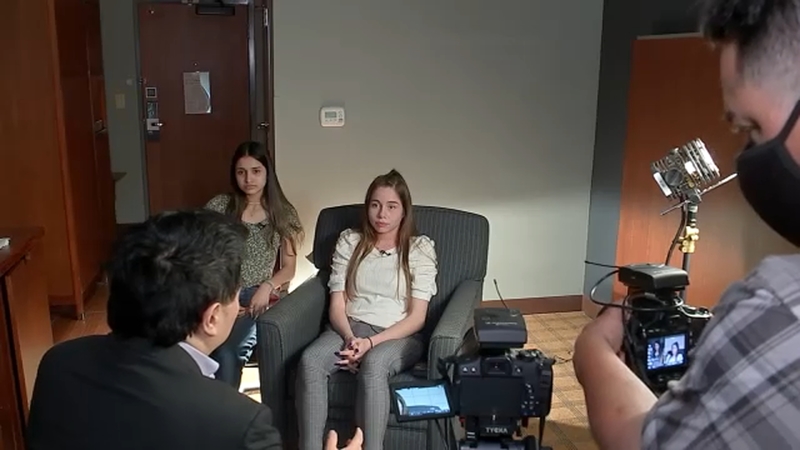 GALVESTON, Texas (KTRK) -- Crews were in Galveston this weekend filming for an upcoming documentary entitled "The Kids Of Santa Fe: The Largest Unknown Mass Shooting" at the Four Points Hotel by Sheraton.

Director Charlie Minn said the documentary is meant to spotlight the events that unfolded on May 18, 2018, which would later be known as the third deadliest high school shooting in America.

Minn said this weekend alone, he has interviewed at least 11 survivors along with the family members of some victims. He said some of them are speaking for the first time on camera, almost three years after the mass shooting.

"For whatever the reason, this thing has been swept under the rug, and it shouldn't be," Minn said. "A lot of stories that are not known to people, even in Harris County. So, again, a documentary is meant to inform, educate, raise awareness to the highest level for change and, boy, does this country need change."

At just 17 years old, Chris Stone gave up his life to save others and nearly three years later he is being honored with the nation's highest recognition for a youth, the Congressional Medal of Honor Young Hero Award.

ABC13 was allowed to be at the hotel where the crews were filming the documentary. Survivor Rome Shubert said he's focused on getting his life back to normal. He's already in his first year at junior college and is an aspiring all-star baseball player.

"I wanted things to get back to normal as fast as possible," Shubert said. "I don't feel like there's any reason in just dwelling in the past when you could just move forward. So, getting back to normal was my number one goal after that, and within two weeks I was back throwing baseball, back at practice. That was the best thing for me, just to get back to normal."

Shubert was one of the 23 people shot that day. He was 16 years old at the time, and was shot in the back of the head as he was trying to run to safety.

Survivor speaks about being shot in head at Santa Fe High School.

"[He] just came in, starting firing off rounds, and everything was kind of a blur," Shubert said. "Then I went out the back, and I hadn't even realized I'd been shot in the back of the head until my friend had told me because I thought that everything that was on my shirt was like somebody else's just in the midst of things, not even realizing it."

Authorities said a 17-year-old student was the one who opened fire inside the school. The shooting lasted a total of 30 minutes and left eight students and two teachers dead.

Minn said nowadays when mass shootings are covered, he feels that there is too much emphasis on the suspected shooter, which is why he says the shooter will not be named in this documentary.

Twin sisters Tabitha and Shelby Guidry also shared their stories for the first time on camera. Their teacher, Glenda Ann Perkins, was one of the teachers who was shot and killed.

"I stopped because I was like, 'Where's Tabitha at?' and I look and I saw him [the shooter] come out of the classroom," Shelby said. "He was switching classrooms, or I don't know if he was just walking out, but he came out and he looked down the hallway, and me and Pricilla stopped and we looked at him, and he threw something at us and it shattered on the floor. Hit our legs and we just ran out, but before we ran out, Mrs. Perkins pushed us out. We ran out in the field, and when I looked back, all I saw was her laying on the ground, and her legs just drop. We just ran out, and we saw the cops come and we were like, 'What's happening?!' and they were like, 'We don't know. Just run.'"

Tabitha and Shelby said one of the responding officers, John Barnes, should also be recognized for his heroic actions that day.

"When we were running out, he was running in," Shelby said. "He got shot, and he was the first in there."

Minn said Barnes was also interviewed for the documentary this weekend.

Officer John Barnes, who was hospitalized for a month after the Santa Fe High School shooting, returned home.

"I hope this brings a lot of peace to the families as much as it can," Tabitha said. "It's three years later and we're expected to be OK, but we're not. And I feel like we shouldn't be expected to have to move on so fast because this is something that we're going to carry with [us] forever."

The documentary is set to air in the fall. 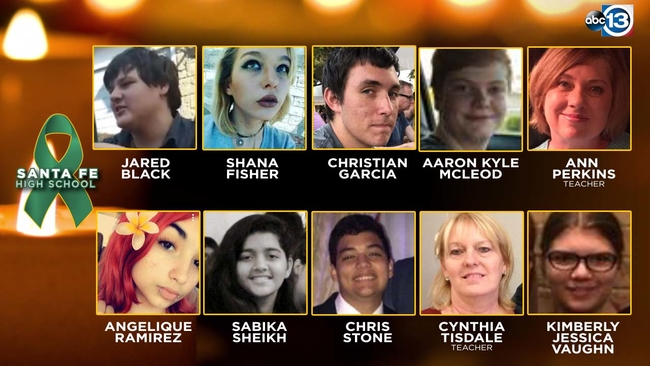