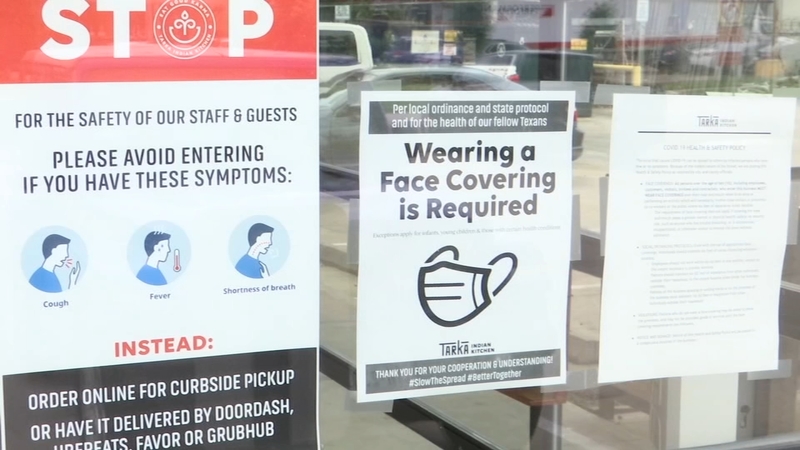 HOUSTON, Texas (KTRK) -- The governor on Monday ordered restaurants across Texas to reduce capacity, but some owners would like to see him issue a statewide mask mandate.

No matter what happens in the future, the Texas Restaurant Association is already projecting that 30 percent of restaurants will close.

On Monday, dinner service looked different at the Rustic in downtown Houston. The restaurant expanded to 75 percent capacity at the beginning of June, but needs to reduce to 50 percent today due to the governor's new order.

While restaurants reduced capacity, bars were forced to close and serve to-go food only. If takeout became the only option again for restaurants, the Rustic said it would be devastating.

"That's like fixing a gunshot wound with a stick of bubble gum," Free Range Concepts owner, Kyle Noonan said. "It just doesn't work." It does work for others. At Tarka Indian Kitchen in the Heights, the majority of business is to-go.

"We've been pleasantly surprised," Tarka Indian Kitchen CEO, Tinku Saini said. "Week over week our sales have continued to go up. We actually were positive with sales compared to the same time last year."

However, experts fear what this means long-term. "I'm afraid, we're already projecting 30 percent of our restaurants will close," Texas Restaurant Association president, Dr. Emily Williams Knight explained. "We'll see what the next couple weeks bring, but that number could accelerate."

One thing the association would like to see is a statewide mask mandate. "I don't believe that's the role of small business, and I think it would be very helpful if Gov. Abbott issued a statewide mandate," Knight said. A few counties, and several cities have issued mask mandates in southeast Texas. But there are plenty of places where they're not required. Experts believe a statewide order would make it safer for front-line workers.

"Isn't this just like no shirts, no shoes, no service? I'd argue it's slightly different," Knight explained. "We're living in a different time, and that context it makes it very difficult for us to be that enforcement." For now, the governor says he'll leave the orders to local leaders, although he highly encourages Texans to wear masks.