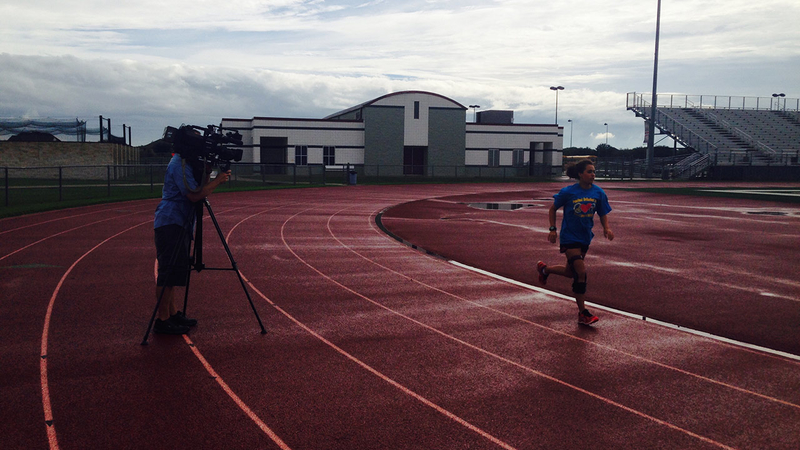 "My love for the sport, running kept me going," said the sophomore.

A brace on her knee and scars on her legs tell part of the story.

"Three fractures on my pelvis, I was in a wheelchair for three months," said Hendricks.

There are too many injuries to count. Hannah was running with a classmate in July of 2013 when she was struck by a car on a Pearland street. She doesn't remember anything about it. When you talk with her family though there is nothing about that day they can forget.

"I followed a policeman and I saw another girl standing there and she wasn't," said her mother Eileen Hendricks.

Doctors told Hannah their goal was to help her run again.

She said, "When they said that I said no I'm going to run again there's not if. I am gonna run again."

Surgeries and months of rehab were underway when the new Cross Country Coach at Pearland met her.

"I watched this little girl who was in a wheelchair and so broken. I introduced myself to her and the first thing she told me is that she's going to run again," said Coach Demetrius Peters.

She is now and has already medaled in one race. As she runs she is getting faster and stronger every day even inspiring her own mother.

"It makes me want to cry. I'm so proud. Filled with joy she is still here with us because it was scary. Watching her is a blessing," said Eileen.

Hannah said, "When you get pushed down you say OK I can get past this too and rise above it."

Hannah's goal is to run with the varsity team and eventually study physical therapy in college.

Police determined the incident that left her injured was an accident in which the driver was not at fault. He was not charged or cited for any wrongdoing.