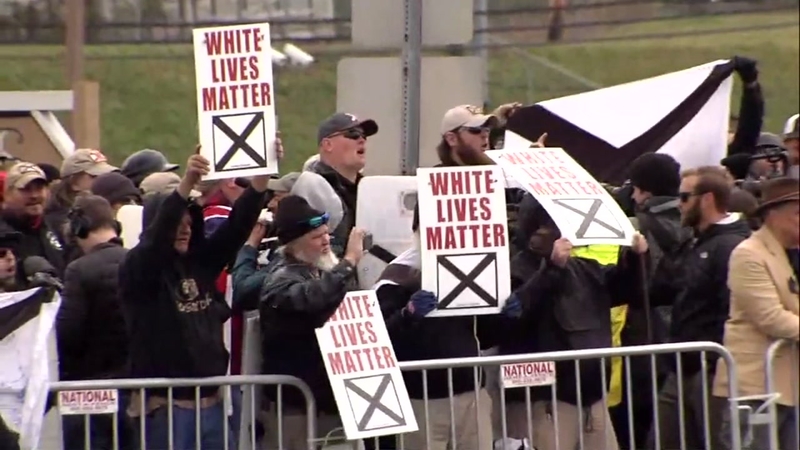 MURFREESBORO, Tennessee (KTRK) -- White nationalists retreated from the town of Murfreesboro after nearly 1,000 counter-protesters showed up to drown out the sounds of a planned "White Lives Matter" rally downtown.

The masses showed up at Barfield Park, packing into a small park pavilion to demonstrate how love can overcome hate.

"We want them to see a very clear presence that we are staying united as Murfreesboro and Mufreesboro Loves," pastor Chris Warren told WZTV.

The organizers of the white nationalists rally said on Twitter they cancelled the event because they "Had some intel Murfreesboro was a lawsuit trap."

Had some intel Murfreesboro was a lawsuit trap. Not worth the risk https://t.co/PGsxlBYlXq

But according to WZTV, the number of counter-protesters far outnumbered those who were there to express their white nationalist views.

The group huddled together for prayer, and listened to speakers who focused on a message of peace.

From the park, the members broke off and then traveled to two sites away from the courthouse square after the city released a statement asking people to stay away.

The counter-protest was described as peaceful, but those who were there said they were ready to greet white nationalists with chants of love and kindness.

"In general, I believe standing up for what you believe in and not fighting against something you don't believe in is where the power is," said counter-protester Susan Dickerson.

Joshua Hendricks, who attended the counter protest, said the key to defeating messages of hate is to "keep up a loud noise of acceptance, diversity and love."

"We're not going to go fight and yell and scream in their faces but try to outshine them with the love that is in our hearts," Hendricks said.

In Virginia, a driver plowed his vehicle into a crowd of counter protesters at a white nationalist rally.

The white supremacist who helped lead the Charlottesville rally that devolved into violence says he is fearful for his life.