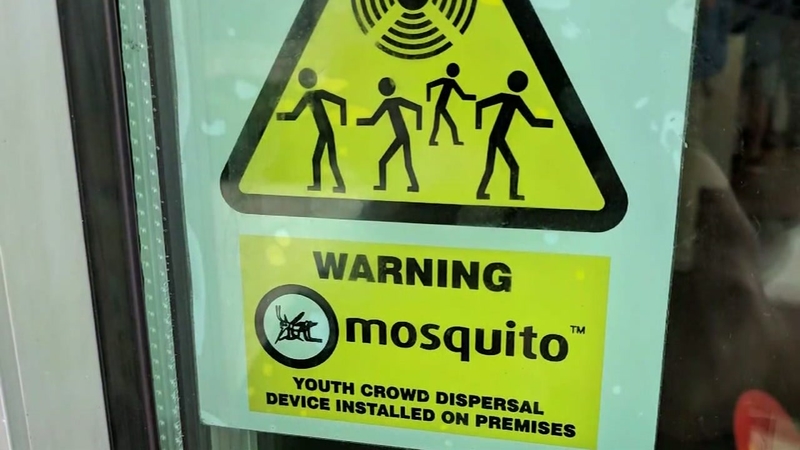 HOUSTON, Texas (KTRK) -- A noise alarm at a Midtown McDonald's designed to keep loiterers off their property is causing migraines and anxiety, according to a couple who lives across the street.

For five years, Ashley and Omied Willis have enjoyed the view of downtown from their Midtown apartment. They don't even mind the freeway noise below. What they cannot live with now, they say, is a perpetual and shrill sound that started a few weeks ago.

"Violating is the best word. We feel violated in our own home," said Omied Willis.

The couple followed the high-pitched noise to the source, their neighbor, a McDonald's on West Gray.

A sign on the door says the device is to disperse young people. It's called a 'mosquito' alarm, aimed at preventing loitering. When Eyewitness News was there, it did not appear to be working. There were still 15-20 people hanging around outside.

Internationally, the device has been called "inhumane." The Willis' would tend to agree.

"No one should have to wake up to a noise that pierces the air. I'm no legal eagle, but that's the definition of cruel and unusual punishment to me," said Willis.

According to the couple, the restaurant has agreed to only use the alarm between 6 a.m.-10 p.m., but that agreement, they say, has not been adhered to.

"Nothing is more important than the safety and security of our customers and employees. On occasion, we work with local police departments to help maintain a safe environment. We are currently working with HPD on these security measures. We appreciate the feedback from neighbors and are making adjustments."

The couple, who got married last November, has called Houston police multiple times and they say the restaurant has been cited. They simply want the device taken down.