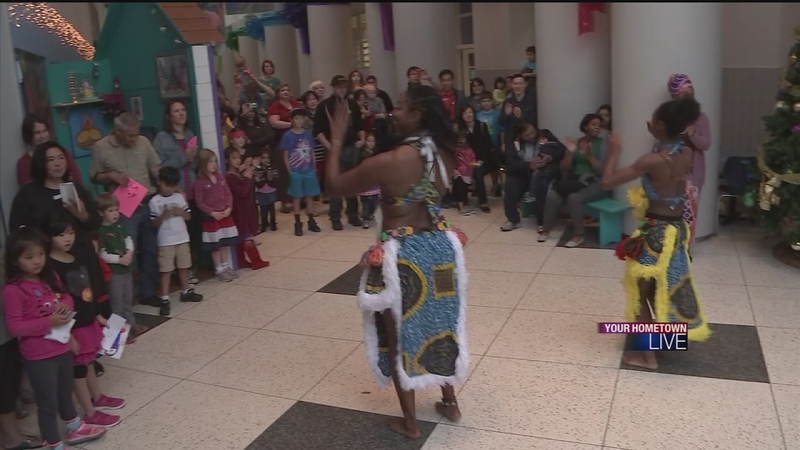 HOUSTON (KTRK) -- Friday marks the first day of Kwanzaa. The African American holiday celebrates its 48th year of honoring the values of ancient African cultures. The Children's Museum of Houston kicked off the holiday in the morning with performances from the Koumanke'le' African Dancing and Drumming ensemble.

"Drumming is very celebratory in African culture, and it's one part of the culture we were able to bring here to America that is celebrated in almost every culture, and it gets everyone up and dancing and having a great time," explains Bunmi Gaidi, the Arts Educator at the Children's Museum of Houston.

Alana Taylor has practiced African dance for two years and loves performing for others.

"It speaks to my soul and everything that I am and represent - the culture and sharing the culture with everyone else," says Taylor.

Music is just part of today's festivities. Children also learned about Kwanzaa through the "Seasons of Sharing" exhibit. There, they find drums, faux foods specific to African culture, a kinara candle, and lots of reading. There, the children can learn about the history of Kwanzaa.

"Kwanzaa was created in 1966 by Dr. Maulana Karengai, and he's actually still alive today. He touches at the University of California, and it was created during the time of history during the black power movement and when black people were trying to still gain their civil rights. So, it was an instrument to be used to promote good in the world and celebrate African culture," says Gaidi.

There are seven principles for each of the seven days of Kwanzaa. Each is meant to empower individuals and the community. During the seven days, celebrants ask each other in Swahili, "Habari Gani?" or "What's the news?" They respond with that day's principles.

1. Umoja -unity. The first day's focus is to build a community that stays united.
2. Kujichagulia - self-determination. This day, celebrants should consider their choices and choose what's best for the family and community.
3. Ujima - responsibility and collective work. This day reminds those that they have a responsibility to themselves and their society.
4. Ujamaa - cooperative economics. This principle says to support businesses that care about the community.
5. Nia - a sense of purpose. Set goals for oneself that benefit the community.
6. Kuumba - creativity. This principle encourages using creativity to make a better, more beautiful society.
7. Imani - faith. Faith focuses on honoring the best of one's self and one's traditions, as well as the belief in bettering the world.

The Seasons of Sharing Exhibit will be at the Children's Museum of Houston through January 4th. The Koumanke'le' Dance and Drumming Ensemble will be holding workshops at the museum through December 30.
Related topics:
societyhoustonholidaymuseumskwanzaahometown live
Copyright © 2021 KTRK-TV. All Rights Reserved.
More Videos
From CNN Newsource affiliates
TOP STORIES