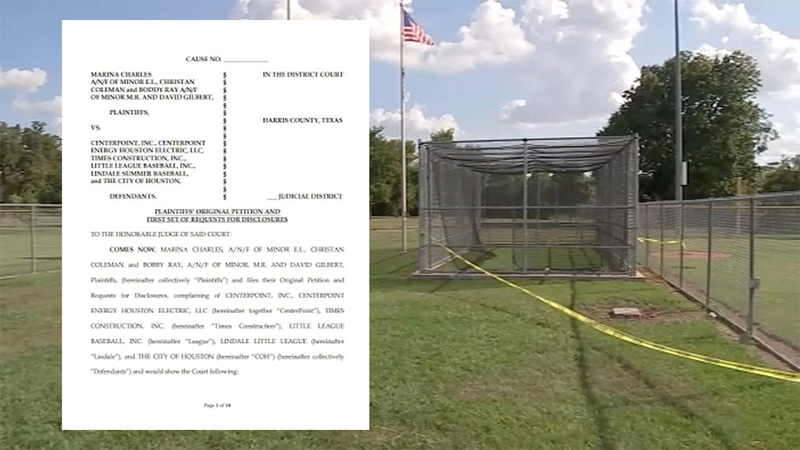 HOUSTON, Texas (KTRK) -- Families impacted by an electrical shock at a Houston baseball field filed a $25 million lawsuit on Friday.

In September, two girls and a grandfather were shocked at Moody Park in north Houston. It's a moment David Gilbert said he won't forget.

$25 MILLION DOLLAR LAWSUIT: The families who were shocked at a Houston park four months ago have filed a multi-million dollar lawsuit. Hear from the emotional parents, and grandfather who saved the girls on @abc13houston at 4pm. pic.twitter.com/R5puxxSVh2

"I grabbed her from her ankles and started shaking a lot," Gilbert recalled.

Gilbert said the incident ruptured muscles and left him with double vision.

"It's like I'm drunk all the time," Gilbert explained.

Emma, 9, and McKinley, 6, were doing push-ups when their parents said Emma suddenly made contact with an electrical box, which injured both girls.

They each were burned. Emma's mom, Marina Charles, said she's had surgeries and continues to suffer with mental issues.

"She talks about killing herself and not wanting to be here anymore," Charles said. "She thinks that it's her fault."

A city spokesperson said they haven't received the lawsuit and will have no response at this time. They also mentioned a statement following the incident.

"All ground cover boxes at Moody have been inspected for safety and their replacement has begun with work to be completed as soon as possible," read the statement.

"Beginning with high-usage areas, all electrical ground boxes, regardless of location, within a city park, will also be replaced or upgraded for safety."

CenterPoint Energy told ABC13 the company does not comment on pending litigation.

Little League Baseball said, "We continue to hope for the best for all impacted by this unfortunate accident, however due to the pending litigation it would be inappropriate for Little League International to offer any further comment on the accident at this time."

The 14-page document alleges electrical complaints were made prior to the incident and the league should've done more to train its staff.