IT'S FOR THE KIDS: Donations from Kimmel-Cruz 'Blobfish Classic' will go to children's charities in Houston 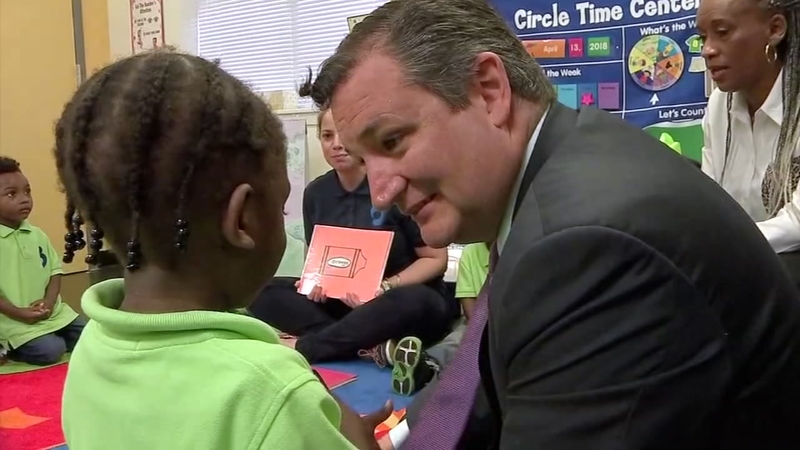 Donations from 'Blobfish Classic' will go to children's charities in Houston

HOUSTON, Texas (KTRK) -- On its face, it appears to be the battle of a jock versus a band geek, but that doesn't really tell the full story of the Blobfish Basketball Classic.

He may have been on the basketball team, but Texas Sen. Ted Cruz says he rode the bench in high school. In Jimmy Kimmel's yearbook, the late-night host proudly shows off a clarinet. So, it's hard to say just how much athletic ability will be on display Saturday. Though, one thing is for sure, in the end, the Blobfish classic will be all about the kids.

Tickets to Saturday's event were free but attendees were asked to donate to the charities selected by the opponents: Texas Children's Hospital and Generation One. In the terms of their agreement to play one-on-one, both Kimmel and Cruz committed to donating $5,000 to charity.

It was back in May 2017 when Kimmel delivered a heart-wrenching monologue, announcing his young son Billy had undergone open-heart surgery for a rare heart defect.

With his son on his path to recovery, Kimmel made the plea to Republican lawmakers to reconsider the healthcare bill that at the time that could have undermined protections that would prevent insurance companies from imposing lifetime limits on children born with serious illnesses, like his son Billy. Counting himself among the lucky, Kimmel said he hoped that every child in serious need of care could get it, regardless of their parent's ability to pay.

With that emotional back-story, it's no wonder Kimmel picked Texas Children's Hospital as his beneficiary for the donations raised during Saturday's event.

"Not many people really, until they're cast into this world, realize that children also have heart disease even before the time they're born. And so I think that this pseudo conflict between Jimmy Kimmel and Ted Cruz is a sort of a fun way, really, in my eyes, of bringing attention to the plight of some of these children and so for that reason I'm thrilled about this happening," said Dr. Dan Penny, chief of Pediatric Cardiology at Texas Children's Hospital.

Thanks in part to charitable donations, Penny and his team with the hospital's heart center will be moving into the hospital's new Legacy Tower, with world-class facilities and cutting-edge technology to serve patients and their families.

It was an April visit to the early childhood development non-profit Generation One in the city's Third Ward that touched Cruz's heart.

Sitting on a brightly colored rug among a circle of three and four year olds, the Texas senator read books to the children while they found moments to tug on his necktie. Cruz was there to meet with leaders and supporters to discuss school choice, advocating for tax credits for businesses and individuals willing to make donations to schools like Generation One.

Generation One founder Mike Malkemes says donations like the one Cruz will make to the school will help further their goal of developing Third Ward's neediest, young children into strong adults.

"We started an elementary school, pre-K, to fourth grade, eventually went up to sixth grade and our kids went from being shot to getting a little bit older and being killed and we realized we were missing the time frame where we can be the most, make the most difference in most impact. We did a bunch of research, flipped everything over to early childhood education, zero to five, six, seven, eight is where we can make the most impact and really move the needle," said Malkemes.