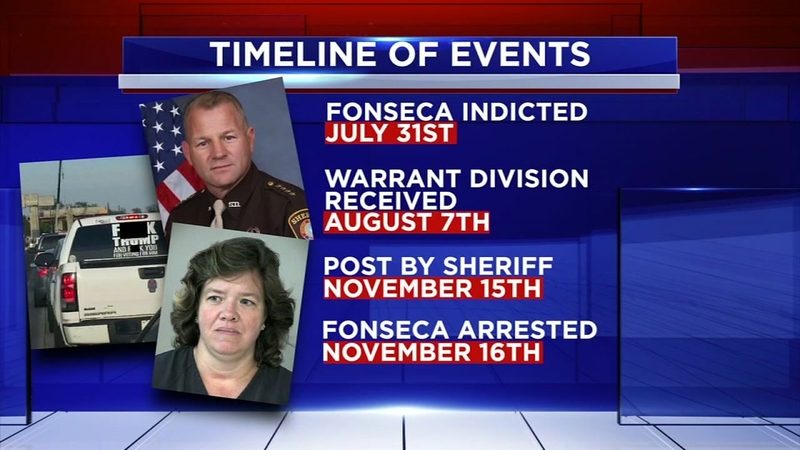 RICHMOND, Texas (KTRK) -- Court documents are revealing new information about the criminal allegation against the woman called out publicly by Fort Bend County Sheriff Troy Nehls over controversial stickers posted to the back of her truck.

Karen Fonseca faces a single count of felony fraudulent use of identifying information, which prosecutors say is unrelated to the issue with the truck. The stickers on that vehicle read "F-U Trump" and "F-U for voting for him."

Nehls posted to Facebook Wednesday asking to speak with the driver, saying the statement should be modified and that a prosecutor suggested it could be something that rose to the level of disorderly conduct.

Fonseca was arrested on the fraud charge Thursday. Upon release from jail after posting bond, she said she believes Sheriff Nehls and the truck controversy had something to do with her arrest. He denies that, and any claim that he was using the post to position himself for a future run for higher office.

The fraud indictment was unsealed Friday.

Fonseca is accused of fraud dating back to 2014. According to the indictment, she used identifying information of another woman without her consent. There has been an open warrant for Fonseca's arrest since August. According to court documents, Fonseca was indicted July 31. The indictment was sealed at that time, meaning no one other than law enforcement would know about it until after her arrest.

"Fraudulent use of identifying information is a serious charge as far as many people are concerned and as far as our office is concerned," said Fort Bend County Assistant District Attorney Scott Carpenter.

A spokesperson for FBCSO says the only connection between the arrest and the Trump stickers is that they didn't know who was driving the truck until they received tips following the sheriff's post. They ran her name and saw that she had an open warrant.

If convicted in the fraud case, Fonseca could be sent to state jail for up to two years.