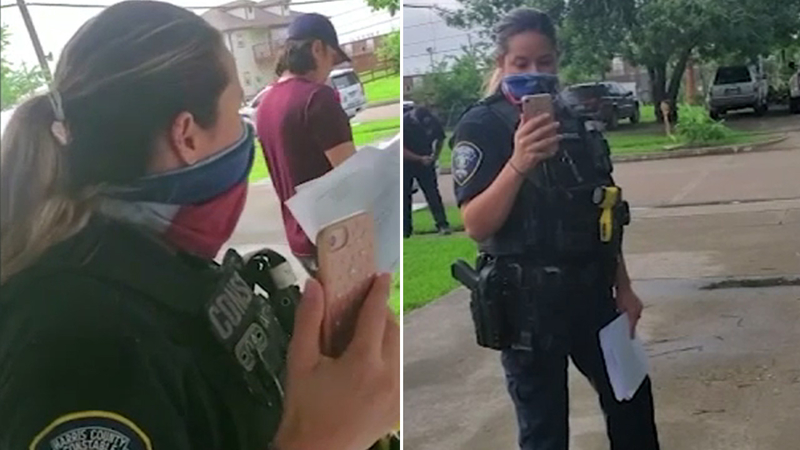 Deputy under investigation after serving custody order in uniform

It's a case where both sides, armed with cell phone videos, are saying they are in the right.

The incident occurred on May 21. In cell phone video obtained by Eyewitness News, you can see Deputy Mariah Martinez at the doorway of her ex-husband Marco Hernandez's home. She is in full uniform and her patrol car is visible in the back.

"Where's Marco?" she is heard saying before asking to see her daughter.

Both Martinez and Hernandez have cell phones recording the encounter. To hear Hernandez talk about the encounter, seeing his ex-wife showing up at his house in uniform with her new husband, who is a Harris County Sheriff's Office deputy, was intimidating.

"Unfortunately, I just don't know what to do in this situation," Hernandez said. "She came with patrol and in uniform and her husband was right there."

He also said the situation scared his mother, who was home at the time.

Martinez's lawyer, Tom Nixon, paints a completely different picture. He said she was following a court order on their child custody and the fact she was in uniform is irrelevant.

"It just so happens she was on her way to work, and she was going to stop off and see her child and say, 'Hello,' and that's what she did," said Nixon.

Hernandez said he was concerned enough that day to call local law enforcement. This prompted deputies from Harris County Precinct 2, where he lives, to respond. Video shows a Precinct 6 supervisor also showed up.

Martinez did not end up seeing her daughter that night, and she subsequently hired Nixon.

"He's doing everything he can to alienate this child from her mom, and it's terrible," said Nixon, who admits that Martinez has missed a number of visitations over the years, but is now in a better financial situation. "She's finally getting enough money together to get a lawyer to help her. That's what we're doing."

Hernandez disputes that he's trying to deny a mother from visiting her child.

"I offered to have another agreement," he said. "We spent a lot of money. I lost my business, my patience, my peace."

The Harris County Precinct 6 Constable's Office confirmed it has opened an internal affairs investigation into the incident, though Martinez remains on the job.

"How there's a claim of official oppression is beyond me," said Nixon. "It's the stupidest thing I've ever heard. There is a court order that says she is entitled to the possession of the child at 6 p.m. on a Friday."