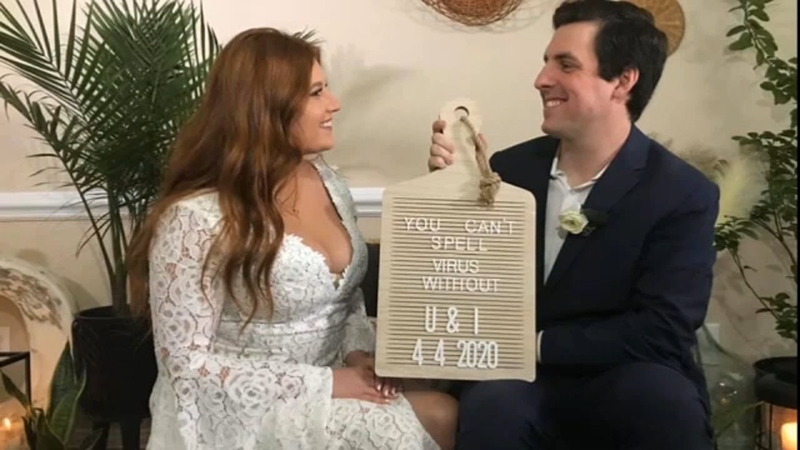 A couple from the Houston area drew the line when it came to their wedding, but it wasn't the one they spent months planning.

Matt and Ashley Engles had been waiting a long time for their nuptials, and planned a big ceremony in Houston. When the "Stay Home- Work Safe" order was issued, a big wedding became impossible because of the limitation of no more than 10 people in a group.

"We always planned it for April 4, because that's my late grandparents' anniversary. It's a really special date for us and it meant a lot to keep it on that day," Ashley said Sunday, on their first day as a married couple.

The ceremony took place in their Dallas apartment. The only witnesses were the couple's two dogs, one of which sat on the train of Ashley's wedding dress. The officiator presided over the wedding via Zoom, and the wedding was streamed on Facebook as well.

The original wedding list was 130 people. So far, more than 1,500 people have viewed it.

What would have been a disaster in another time turned into just another memory of the Engles' determination to marry.

Matt had a ring for Ashley, just not the one they planned on. "Her ring was at the jeweler's, but because it was shut down by the Stay At Home order, we had to improvise and order a new ring. It came in about two hours before we did our online ceremony," Matt said.

Rather than a big wedding cake, the couple bit into a pair of brownies. Ashley found the brownie mix in the pantry the night before.

They also paid for a honeymoon to Bali, which is now postponed. "The airline gave us credit and we can take it when we want to in the future," Ashley said. "When this is all over."

The day after the celebration, the two wore what they planned to pack on their honeymoon. Matt was in a Hawaiian shirt, and Ashley wore a tropical T-shirt.

"We're calling it our 'quarantine moon,'" they laughed. They're also adding Clorox wipes and toilet paper to their wedding registry.

The moral to the story is that love doesn't have to wait, even during a pandemic. "We're healthy. But, right now a lot of people are losing their loved ones. We just feel lucky to have each other and all our family and friends to share it with."