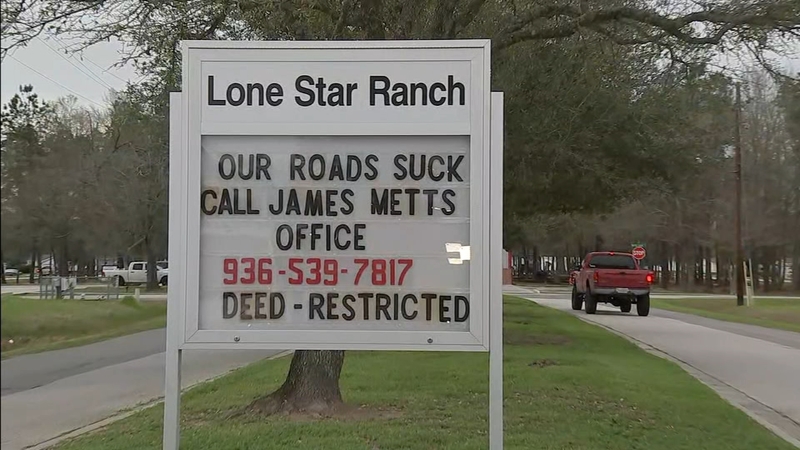 Residents in Conroe fed up with potholes

CONROE, Texas (KTRK) -- Neighbors in one Conroe neighborhood are becoming more frustrated about a pothole problem they say is growing even after repairs have been made.

The roads in the Lone Star Ranch neighborhood are nearly 20 years old and they've never been repaved. People who live in the community that consists of about 500 homes say the potholes are getting fixed, but they're coming back soon after they've been filled.

"You know, right now, I'm actually having an issue with one of my passenger front tires, (it) actually has wheel bearing damage, and they quoted me at $300," said Claribel Quintana who lives on Lone Star Ranch Drive.

She said she's used to shelling out hundreds of dollars repairing her car because of pothole damage every six months.

"As soon as we get a good rain, it's just like it bubbles right back up and washes out and now you're with a bigger hole," said Ronald Basco, President of the Lone Star Ranch Property Owners Association.

Neighbors have become so fed up, they've posted signs at the entrance of the neighborhood saying 'Our roads suck,' with a number for their commissioner's office listed.

"It's now to the point to where the under-structure of the asphalt that we have is deteriorating, Basco said.

Metts told ABC 13 over the phone that his budget for road repairs ranges between $1.7 and 2 million dollars for the fiscal year and that repaving one mile of asphalt costs about $125,000. He said the roads worsened after Hurricane Harvey and Tropical Storm Imelda and, without federal help, it would likely take another road bond to permanently fix all of the streets in his district.