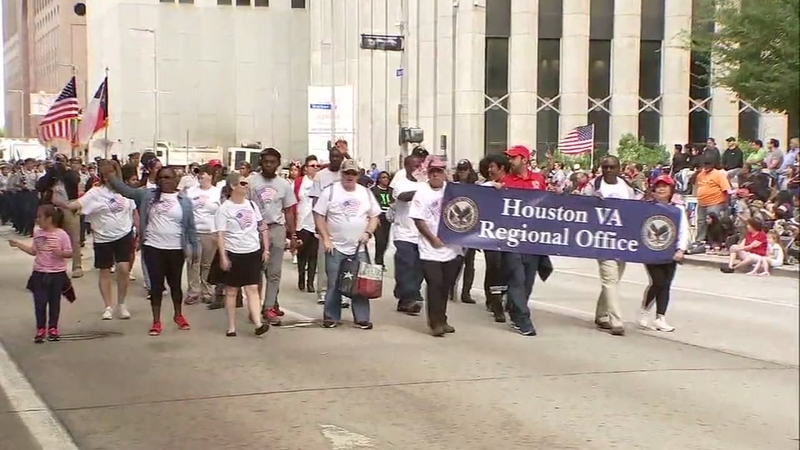 HOUSTON, Texas (KTRK) -- For the first time in years, there will not be a Veterans Day parade in Houston.

There are 300,000 veterans across the Houston metro area, and around 20,000 attend the annual parade.

"It's empowering," Air Force veteran Mike Poellnitz said. "It made you feel like what you were doing meant something. That it wasn't just something that drove me personally, but other people felt was worthwhile."

"I think it's very heartwarming to see, especially for the older veterans who haven't been a part of the Renaissance, if you will," Army veteran Robin Bressie said.

But this year, the floats and military salutes won't happen. Instead, the city will hold a 9/11 remembrance run and ceremony at city hall.

Veterans Day 2017: Here's where service members can get freebies, discounts and deals

"That's even more disappointing than not having the parade," Poellnitz said. "You know what I mean? It's like saying, 'We want to honor you guys, but we're not going to give you everything you're due.'"

Houston officials say it's because of Hurricane Harvey. The storm canceled the 9/11 race, and it was rescheduled for Veterans Day weekend.

"It just became difficult to do a 5K run on the same streets where a parade would be held just a couple hours later," said Carl Salazar, Houston's director of veteran affairs.

Officials admit they could've done more to get the word out about the changes.

"I understand there's been some confusion in the community. In all honesty, we've could've done a better job communicating because it's different," Salazar said.

The good news? The city says the parade will be back next year, and the celebration could look different. The city is considering forming a parade committee.

"That may result in some changes in the route or what kind of floats we include or things like that," Salazar said.

Some still don't understand the decision, especially since the city just put together a World Series parade for the Houston Astros.

The city said there is no comparison.

The parade isn't happening, but certain Veterans Day traditions will stay the same this year. There will be a job and resource fair at city hall from 8 a.m. until noon and a traditional ceremony at city hall at 10 a.m. ABC13 is offering a live stream of both the ceremony and the run on the ABC13 app.

But veterans hope to see their parade return next year.

"I understand the Astros," Poellnitz said. "Believe me, it was deserving, but don't forget about us."