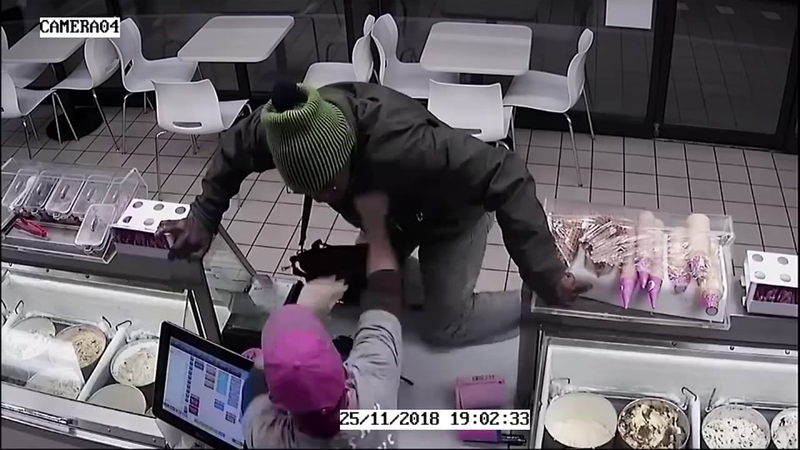 SEATTLE, Washington (KTRK) -- Leslie was in front cleaning the coolers when the suspect walked into her Baskin-Robbins store.

"I'm like, 'Let me get behind the counter real quick so I can serve this customer'" Leslie said. "Then as soon as I get to the counter, he grabs me by the apron and then holds his knife to my stomach."

What the crook didn't count on was her coworker, who kept his cool, telling the thief to calm down. As soon as he opened the register, the thief drops the knife and lunges for the money.

"My coworker grabs his knife and kind of like throws it at him," Leslie said. "Then he turns around like he's gonna leave, but then he comes back and tries to jump over the counter."

As she calls 911, her coworker goes from ice cream slinger to throwing punches and kicks, all while holding the suspect's knife.

"He was very intent on getting that money. He didn't care if the clerk has the knife or not."

The thief finally grabs a grand total of $6 from the register before bolting out the door with the clerk hot on his heels.

"Not the brightest robbery guy, but he is dangerous."

Fortunately, neither employee was injured. Police have the suspect's huge knife in evidence and they never advise taking on a robbery suspect. Leslie is grateful she wasn't alone.

"It was definitely scary," Leslie said. "I was pretty shaken after."

Luckily, Leslie was able to take care of her hero after protecting her.