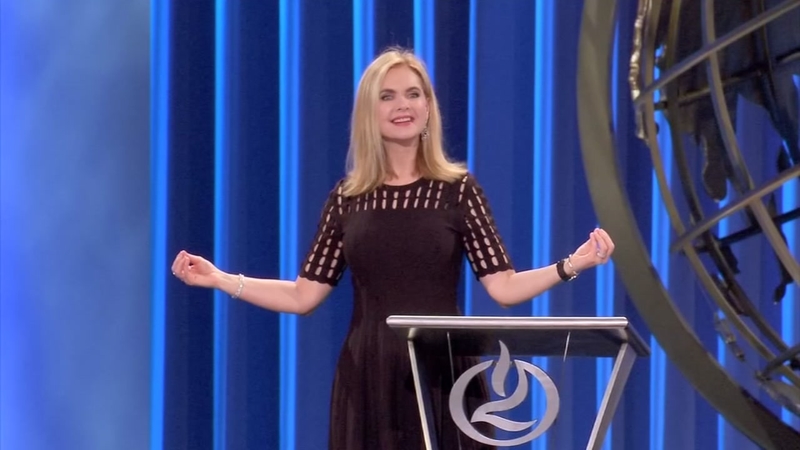 Victoria Osteen is our Woman of the Week

HOUSTON (KTRK) -- Every weekend, around the world, Lakewood Church services are seen and heard by 7 million people in 100 countries. When Joel Osteen preaches, his biggest fan is right by his side.

"I have such a respect for my husband that I think it's one of the greatest things a wife could say about her husband is just the respect," said Victoria Osteen.

She is the co-pastor of the church today. On this Sunday she talked about wisdom and said, "We need to chase after wisdom." She said from the large stage backlit with colorful lights and shadowed by choir members that God's message for wisdom says, "I'm not here to find fault in the way you did it yesterday, ask me for my wisdom today and I will give it to you generously."

She said, "I kind of got a little more comfortable but I was always, I'm still nervous." Osteen says her most comfortable role though is mother of two UT college students. "I'm a wife, I'm a mother, I'm a pastor, but I'm just an ordinary woman trying to do my best," said Osteen.

Jonathan and Alexandria are both students at University of Texas. Jonathan a senior and Alexandra a freshman.

Eyewitness News Reporter Christine Dobbyn asked, "How do you balance being a wife, mother, having a career and being in the public eye so much?"

"I love being a mother first off, that is my very favorite job, the thing I love the most. Being a mom and a wife. I'm so fortunate to have two wonderful children, a boy and girl, Alexandra and Jonathan. I spend a lot of my time wanting to be the best mother I can be. Trying to grow, trying to anticipate my children's growth," she said. "They are a part of the ministry just from doing that. They felt the responsibility, they've been able to grow. They have been able to realize we have to do this together as a family. I don't know what they're going to end up doing exactly, but I feel like in their heart they want to be a part of the ministry."

The role of co-pastor started with small assignments during the offering. She said her husband encouraged her and added, "One day he looked at me and said Victoria, God spoke this to me, the day you start doing your part is when the church will grow. I thought hey, wait a minute. But he was right. The east side church was bursting at the seams before moving to its current home, the former Compaq Center, and the site of the Osteen's first date. "If somebody would have told us the first date we had that someday we would be ministering from the Compaq Center, we would have probably laughed, or ran," said Osteen with a laugh.

Victoria Osteen was born Victoria Iloff. Her father was a NASA engineer, and her mother still runs a Galleria area jewelry store. She credits her childhood with preparing her for what she is doing today. She said, "I was a little bit of an athlete but I was a cheerleader too. I had a great childhood. I had a great mom and dad...very smart dad who treated me like his princess and a very strong mother who thought she could do anything. The combination of that was perfect for me."

She says she never imagined a life in ministry or the spotlight.

"I always loved my friends, and I was always giving them advice. When I went to college I studied psychology so I always thought I want to do something to help people," said Osteen.

Then came the day in 1985 when Joel walked into that family-owned jewelry store.

She said, "My life kind of changed, when I met Joel he was not a minister. He did television production."

Dobbyn asked, "When you met Joel, what was it about him?"

Joel Osteen has been called the smiling preacher, so when Dobbyn asked if he was really that happy at the time, his wife said, "He really is. He's one of the nicest people I've ever met. He's never raised his voice at me. He hasn't and it's funny because it's part of his nature. Some people could be sitting out there going yeah, right, but it is part of who God made him to be. It is a natural part of him. I can see it in my son. My son has never raised his voice at me."

The Osteens were married 12 years before Joel's father, Pastor John Osteen, died. It was after the loss of the founder of Lakewood Church that Victoria says she saw the beginning of her husband's path to the pulpit.

"He knew deep down that God was calling him to step up, he probably was trying to suppress it," she said.

"I was a cheerleader, always had a little cheerleader going on, and I remember sitting on the edge of my seat thinking Lord everything that's in me, every bit of energy, just pour it in him right now. He was doing something remarkable," and added, "The congregation embraced him, I was like they knew it before he knew it. It was beautiful, it was really beautiful."

Dobbyn asked, "Did you ever imagine it would grow into what it is today?"

Osteen replied, "No we really didn't. We were hoping to maintain, hoping to keep the people that were there. We really put our hand to the plow and began to do everything we could. Not necessarily thinking of growth, but just sustaining."

His ministry is a way she believes he can use his gifts.

"I really think Joel has a way of applying the word of God to people's life. They can simply ingest it and get revelation from it," Osteen said.

She says she is also paving her own path to use her gifts too.

"I just want to do what God has called me to do. There's many women who do great things. I just want to be the type of person who says whatever you're supposed to do. Your giftings, the things you love. Do those to the best of your ability and celebrate others," said Osteen.