Did you notice?: A homeless Houstonian died every 3 days in 2019

KTRK
By Ted Oberg and Sarah Rafique
HOUSTON, Texas (KTRK) -- It was late at night when Clinton decided to walk around his homeless encampment and take out the trash. With about 30 people living there at the time, it felt like an overwhelming task for just one person, Clinton said.

That's when he met Michael Sloop.

"I had an emotional breakdown and he came from his camp and he helped me out with the trash," said Clinton, who just recently moved into permanent housing, but asked 13 Investigates to use only his first name.

Even though Sloop kept to himself, the two became friends and looked out for one another, including one night when Clinton said he passed out and needed help once again.

"I was in and out of reality and I saw [Michael's] face," Clinton said. "I gave him a hug and kiss on the cheek and I told him thanks for saving my life."

Looking back, Clinton wishes he could have done the same for his friend.

On Aug. 27, 2019, Clinton realized he hadn't seen Sloop in a few days and that trash had piled up outside the tent he lived in. He went to check up on Sloop.

"That's when I discovered him, you know," Clinton said. "Very, very disturbing."

Clinton told us there are so many people dying on the streets that Sloop isn't even the only homeless man he knows named Mike who has died.

13 Investigates looked into deaths over the last decade and found that despite advocates touting success curbing homelessness, deaths among that population are on the rise.

From advocates, to the medical examiner's office, everyone agrees too many homeless people are dying. But, until we started asking questions, no one seemed to notice that homeless deaths in Houston have increased by 56 percent over the last two years.

INTERACTIVE: What is causing homeless individuals to die in Houston? Explore the map to below to see where and why homeless are dying across the city. On mobile device? Click here for a full screen experience.

13 Investigates originally wanted a copy of autopsies for every homeless individual who has died in recent years to better understand the circumstances leading to their deaths, but the Harris County Institute of Forensic Sciences said there's been so many that it would be an overwhelming task.

Instead, the Institute provided 13 Investigates with a list of homeless deaths in Harris County since 2009, saying the numbers are surprising and would show people found dead on sidewalks and behind churches.

One homeless person died about every three days last year in Harris County, according to an analysis of the data - up 46 percent from 2017.

"It's very sad. It feels like you've failed," said Meg Pohodich, CEO of Harmony House, which is located adjacent to the encampment where Sloop lived. "It's very tragic. It's one of the worst ways to die. You know, no dignity."

Two years ago, there were only 67 homeless deaths in Houston, according to the Institute. That number climbed last year, to 105 deaths, including on sidewalks, bus stops and in creeks or tents.

Now, just one month into 2020, there's already been 14 homeless deaths in Harris County, with at least 12 of those deaths in Houston. If that trend continues, the city is on pace to, once again, exceed the number of homeless Houstonians who died the previous year.

13 Investigates found that despite advocates touting success curbing homelessness, deaths among that population are on the rise.

Advocates tell 13 Investigates living on the streets leads to premature death, but none could pinpoint a specific reason for the increase.

"In Houston, specifically, I couldn't really say," said Ana Rausch, vice president of program operations at the Coalition for the Homeless.

The coalition holds an annual memorial event, which remembers people who died on the streets or in emergency shelters. Based on those numbers, Rausch said she hasn't seen an increase.

But, the Harris County institute, which maintains a database of homeless deaths, including the cause, age, injury location and manner of death, suggests otherwise. The institute's data includes some homeless deaths that occurred at residences, but were classified as homeless because the individual did not have permanent housing and may have been visiting a friend or family member at the time of death.


Even when homeless individuals have family support, breaking the cycle of chronic homelessness isn't easy.

"He really struggled in life," said Sloop's sister Michele Nimmo. "You could tell he really wanted more, but certain things just always kind of kept him back."

The two stayed in close contact, and Sloop would sometimes spend weeks at Nimmo's home in Fulshear, where he'd indulge on all the things he didn't have at his tent.

"I just let him eat as much cereal he wanted and we'd drink coffee all day and just talk, just hang out," Nimmo said.

Eventually, though, Sloop would head back to his encampment, where his sister helped get him a tent that could withstand the weather, as well as a table, chair, cot and clothes.

"Everything he ever wanted, he said he had," Nimmo said. "He didn't ask for anything and he didn't need a lot."

Is the homeless count down?

This week, community volunteers traveled throughout the Houston area during a three-day stint to count and interview homeless and gather a snapshot of the issue.

The Coalition for the Homeless conducts the Point-in-Time count, which is required in order for communities to receive federal funding for homeless programs.

In Houston, alcohol overdose remains the leading cause of death over a 10-year period. It's what killed Sloop when he was found in a tent in a field, just north of downtown Houston, according to the medical examiner's office. He was 46 years old.

"I know he's in a better place now and someday I'll see him again," Nimmo said. "It's just ... I feel such ... this void. I can't explain to people how close we were except that I feel like when he died, a part of me died."

Over the last decade, homeless Houstonians die, on average, just before their 53rd birthday - 25 years before the average American.

Harmony House's Pohodich said her organization provides a bed and locker to homeless individuals at an affordable, daily, weekly or monthly rate. But, she doesn't require individuals to be sober to live at the property and told 13 Investigates best practices around the country don't require it either. 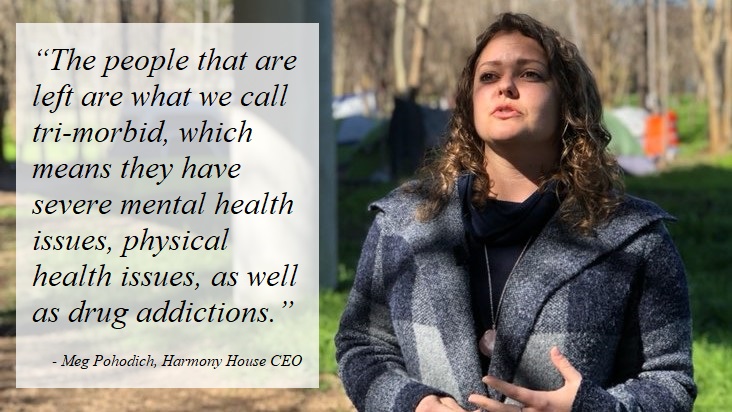 She said housing is the first step toward successfully transitioning out of homelessness. It allows the individual to set tangible goals, like becoming sober, and getting a job - things that are near impossible when living in an encampment.

"If you found yourself sober in a situation like this, where you're living outside and you're dealing with mental health issues, self-medication happens really quickly and that just exacerbates the problem," she said.

"The people that are left are what we call tri-morbid, which means they have severe mental health issues, physical health issues, as well as drug addictions," Pohodich said. "When you put those all together, it makes it very difficult to try and get someone into housing long-term."

Last week, after spending a year working with a person who lives at the encampment next to Harmony House, Pohodich said she finally was able to convince him to fill out paperwork for an apartment. But, timing is important.

"Sometimes, we run into situations where somebody has had a breakthrough. Mentally, they're ready and we go get them an assessment and they get a referral or put on a waitlist for a bed in rehab," Pohodich said. "It might take a couple of days and then, in a couple of days, they've relapsed and they kind of slid back down and they're not ready anymore."

Blue and white tents are scattered around the campgrounds where Clinton used to live and call Sloop a neighbor. Someone's clothes are hanging on a line. Shoes and bikes are parked outside next to tents and trees. One of the residents spends hours maintaining the area, raking leaves and clearing the land to make walkways.

It's a community all on its own, but it can get lonely, Clinton said. He recommends taking time out of your day to just say, "hello" or talk to a homeless person for a few minutes.

"A lot of people that are out here, they have no one to talk to. They might be surrounded by people, but some of them don't have anyone to understand them," Clinton said. "They have a heart and they're just like you and me. It's just the fact is that they're a little less fortunate. When it comes down to it, it's all about respect, love, empathy."

Clinton said it could make a difference in that person's day. For him, that means wishing he checked on Sloop sooner.

"When I discovered him, it broke my heart," Clinton said. "I will never see him again and I would like to have one more conversation with him and let him know that, you know, I will always be there for them."

If you want to help the homeless, advocates and homeless individuals say just take some time to talk to them.

It's been only five months since her brother died and Nimmo still remembers the last time she saw him.

He visited Nimmo at her home, but this time said he only wanted to visit for the day so he didn't have to wake up too early to take the bus to a job working security.

Nimmo dropped him off at the mall, gave him a hug and told him she loved him. He traveled about 20 miles away to an encampment, right off I-45 in downtown Houston. He likely died soon after.

"There's not a day that I don't think about him," Nimmo said. "I just loved him. Everyone needs to feel wanted and loved and I felt like, if I gave up on him, then everybody had given up on him."

Where does Texas rank on list of COVID-19 tests per capita?