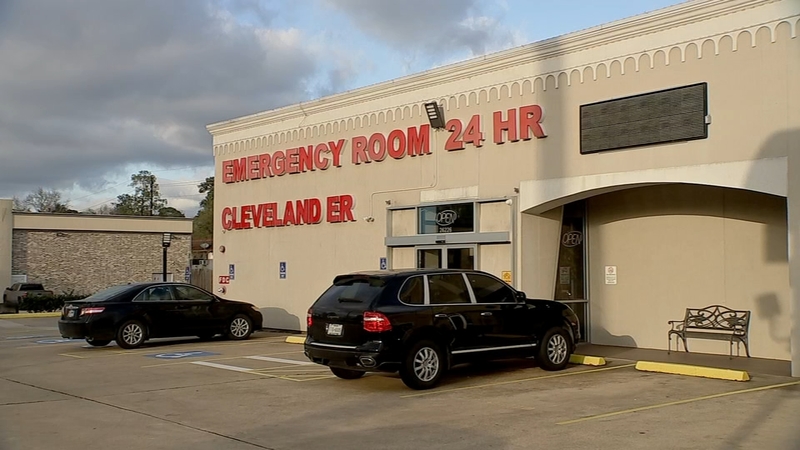 HOUSTON, Texas (KTRK) -- Maria Hollis woke up in the middle of the night and felt dizzy.

"The room started (going) round around and I got to hold onto something," Hollis told 13 Investigates' Ted Oberg. Hollis and her husband took a short drive to Cleveland Emergency Hospital, a small emergency room on the I-45 feeder road in The Woodlands.

After IV meds, a CAT scan and roughly two hours of treatment, she went home, feeling better. Days later a bill for $38,916 arrived in her mailbox.

"When I open it, that bill, Oh my God, Momma mia!" Hollis told 13 Investigates.

The entire bill was her responsibility. Maria is uninsured. As she and her husband looked over the bill, she insisted it must be a mistake: 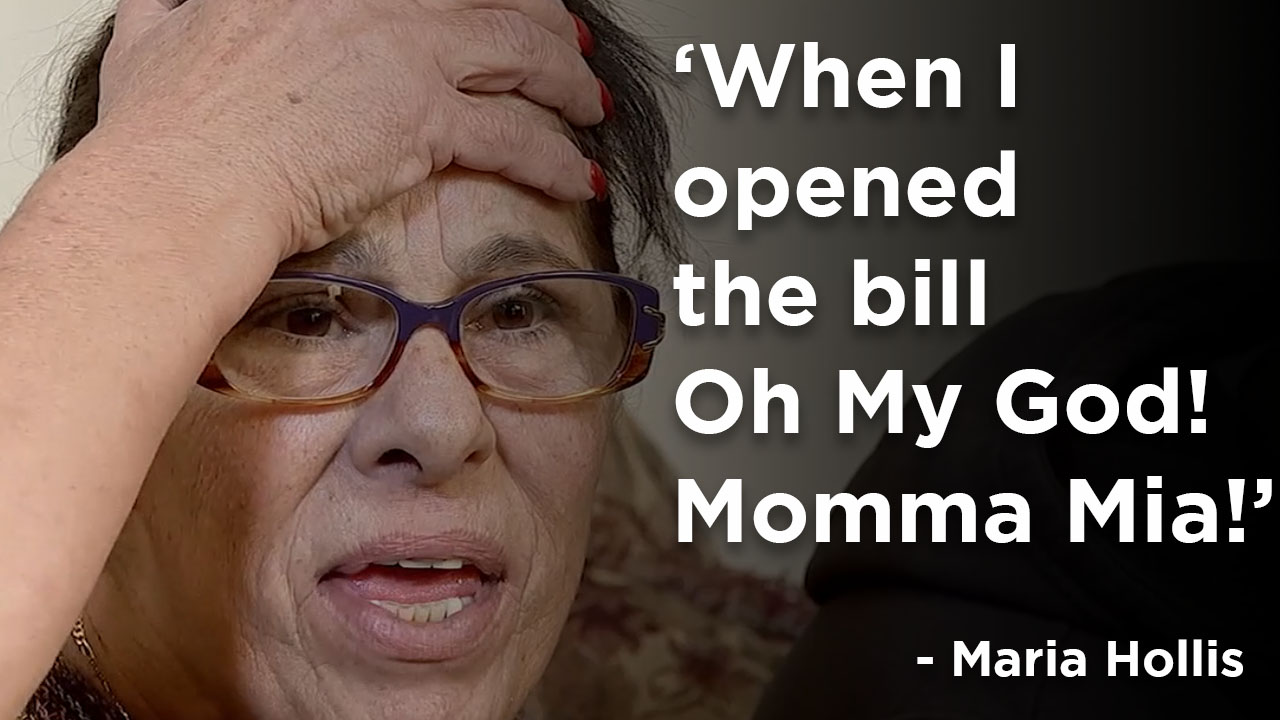 There were eight other charges for medicine, IVs, tests and more.

The hospital assured her it hadn't made a mistake.

Maria and her husband told us they filed a complaint with the attorney general, but haven't heard anything. Then they called the Turn to Ted team.

"That was my idea because I watch Channel 13 a lot," Maria's husband Benny told us, "and you always say if you have a problem and I can help, call me."

A few calls from our team got big results. We stopped by the ER and that seemed to get the hospital's attention. The next day the hospital asked Maria and Benny to fill out some paperwork for charity care and the day after that, the hospital sent a new bill for just $500, knocking $38,416 off the original charges.

"I think having someone to come in, was the best thing to do," Benny told 13 Investigates, "having you come in, made them move their butts and uh, change their mind a little bit."

When Maria Hollis called our Turn to Ted team for help with the bill - she was charged $5500 for a cat scan of her brain and $30,000 in facility and professional fees among other high priced items.

The hospital told us the change in the bill's price is in line with their charity care policies.

The Cleveland Emergency Hospital tells us uninsured or under-insured patients are eligible for its charity care program. Based on the information supplied and federal income levels, Hollis' bill was eligible for the adjustment offered to her. The hospital says the same program is available for any similar patient.

It is the biggest savings for the Turn To Ted team to date.

The lower bill is just the start of our investigation.
EMBED More News Videos

A trip to the emergency room for dizziness, landed a woman a bill for almost 40K.

As he reviewed the bill, Blake Huston from AARP Texas told 13 Investigates, "Maria's case seems to be a poster child for healthcare charges gone wild."

In 2019, after lobbying from patients and the AARP, Texas Governor Greg Abbott signed bills requiring freestanding emergency rooms to inform patients about fees they may be charged and authorizing the Texas Attorney General to investigate 'unconscionable prices for care' at those facilities. The law defines unconscionable prices as prices that are more than twice the average cost in the area. 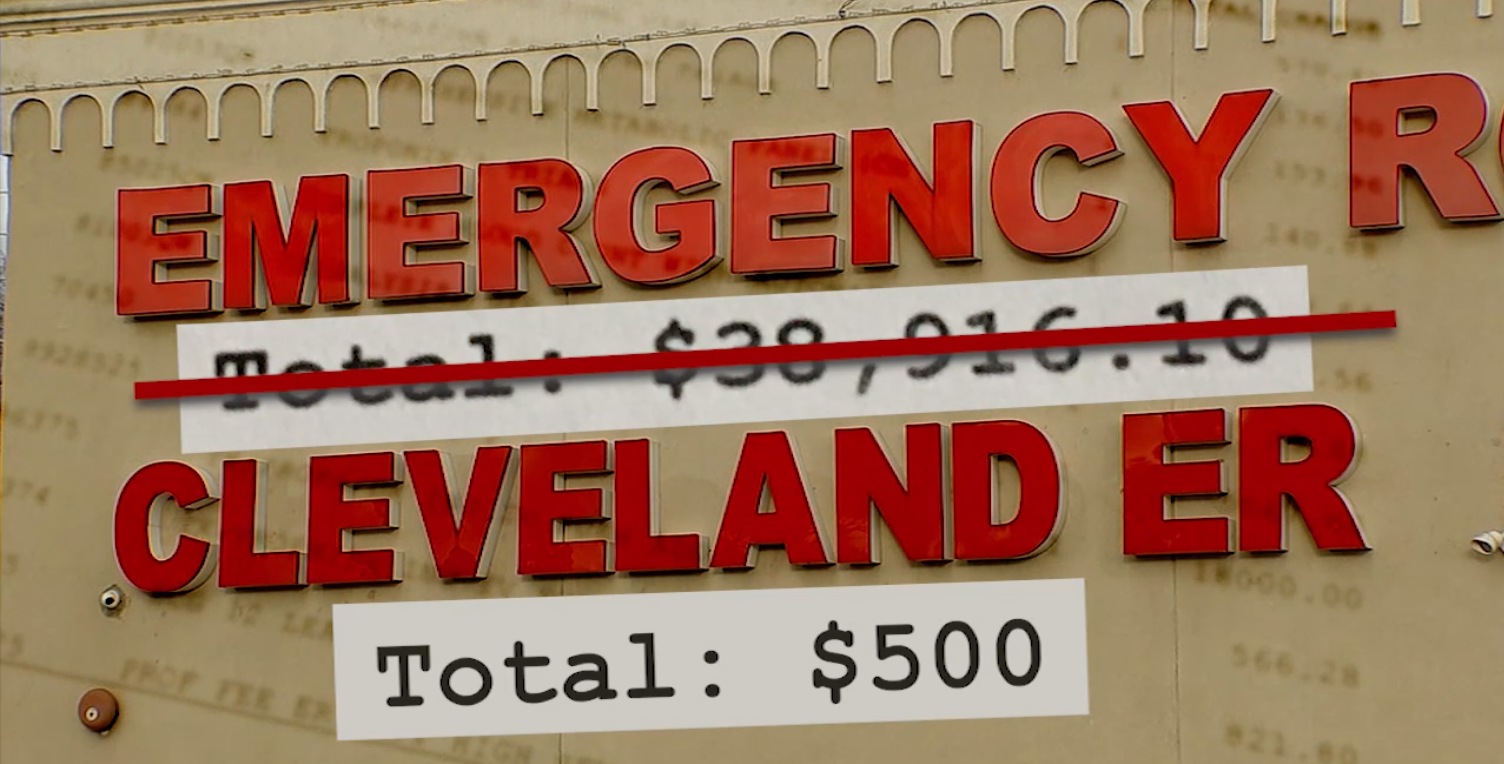 But the new laws can't help the Hollis' as they don't apply to Cleveland Emergency Hospital, where Maria went. Even though it looks like what most of us would call a freestanding ER, it's not. It's actually a branch of another small hospital in Cleveland, Texas, and that means the new laws don't apply.

Huston, of the AARP, vows to use Maria's case to try and tacking the high healthcare costs.

"We'll be talking about this case for a while now, and during the next legislative session to really highlight how there's little patients can do to protect themselves from these kinds of bills," he said.

How did the bill get so high?

The hospital didn't want to talk on camera and in a written response says it's simple: it costs them more to buy stuff, so they charge more for it.

Suman Smith, Cleveland Emergency Hospital's revenue cycle manager, told us they don't have as much buying power as a big hospital so everything from CT scanners to nurses to their own health insurance costs them more than big hospitals, just a mile or two away. Those costs are then passed on to the patient.

The hospital also says they're not eligible for certain Medicare funding to cover costs that big hospitals get.

"It's really frustrating because people tell us that they're trying to avoid going into the really expensive hospital ... so they go to this other facility and it ends up all being worse," AARP's Huston explained.

For uninsured patients, like Maria, who are just trying to find care in the midst of their crisis - purchasing power may be the farthest thing from their mind.

"I'm not putting down that service," Benny Hollis explained as he considered their experience, "The service was good, but, but what they gave us, it wasn't worth this, not $38,000.
EMBED More News Videos

There are things you can do right now to try to avoid a surprisingly high bill in an emergency.

How to try and avoid high charges

There are things you can do right now to try to avoid a surprisingly high bill in an emergency. The most important thing to remember is call 911 in a life-threatening emergency.

In instances short of that, where you go will determine how much you pay, whether you are insured or not. The time to shop around is now when you and your family are healthy, not in the middle of the night or the midst of a crisis.

In most instances, the lowest level of care acceptable will also be the cheapest. For example, if your doctor's office can handle the treatment, start there. If the doctor is not open or available and it is not life-threatening, a retail health clinic or urgent care (accepted by your insurance) will be cheaper than an emergency room. For truly emergent health issues, emergency rooms can handle most anything, but will be the most expensive.

Here is some advice from some of the largest health insurance companies in Texas on where to go. Every insurance plan varies so consider these are broad advice:

Have a tip for Ted Oberg? A problem to solve? Get in touch with us on our tip page, or send a tip below. (On mobile? You can open our form by tapping here.)
Related topics:
societyspringted oberg investigatesmedical emergencyturn to ted
Copyright © 2021 KTRK-TV. All Rights Reserved.
TED OBERG INVESTIGATES