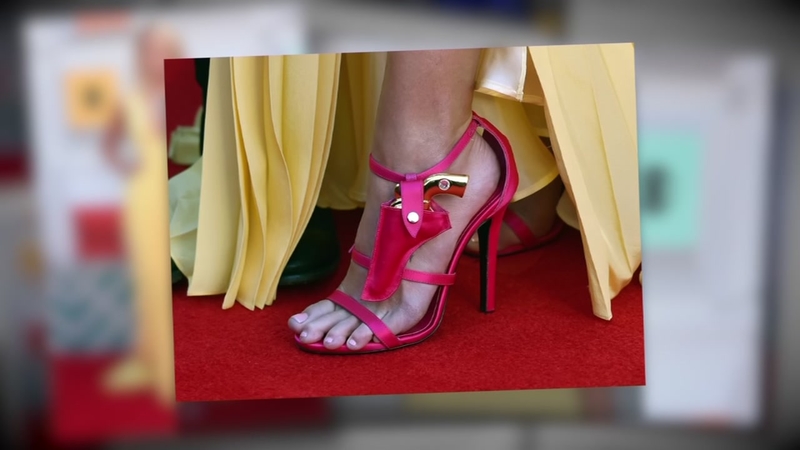 HOUSTON -- It's not a tagline you hear every day: "Designed in Texas, Made in Italy." Now, the creations of a Houston socialite-turned-shoe-designer have caught the attention of celebrities and well-heeled women around the world.

When country music superstar and native Texan Miranda Lambert hit the red carpet of the Academy of Country Music Awards back in April, the look was revenge from head to toe.

"I think it was perfect. It was all fun for her," said shoe designer Joyce Echols.

Donning Echols' "Come and Take It" style in bright pink, Lambert's stylist paired the heels with a floor length, yellow dress with plunging neckline. It's a look the styling team hoped would be just the ticket to draw any attention away from the possibility that Labert's ex-husband, Blake Shelton, might show up to the very same award show with a new beau.

"It had that pop and I think she's a really strong woman and stylish and so it all worked together really well," said Echols.

The "Come and Take It" style features a gold, bejeweled gun, modeled after a Colt. It's eye-catching and exactly the sort of thing that neither Lambert, who sings about guns, nor Echols shy away from.

"It's not real," Echols said of the gun. "But I think it would be fun here in Texas going to certain parties to maybe have one that's actually working, but of course, with no bullets in it."

Echols says she envisions her brand as outfitting a woman both edgy and elegant.

"I have barbed wire and I was just thinking how cool would that be on a really elegant shoe," she said holding one of her creations. "The the shotgun sort of casings - I have some shoes where the bullets actually come out, sort of like a bandolero belt of bullets. It just makes for more interesting conversation but it's not like you would say, 'Oh my God, that's a' -- until you're right up on it to see what it is."

Echols says she began sketching and designing when she was in grade school.

"I was always getting in trouble for sketching and they were always taking some of probably my best creations that I have and throwing them away," she said.

What has manifest from those sketches is an expanding accessories brand that will soon include jewelry, belts and those high-end shoes ranging in price from $500 on up.

The pink pair Lambert wore are nearly sold out after her appearance on the red carpet.

"We're getting them in silk satin and red, in a really beautiful ruby red, so they can be worn with many things -- jeans and black-tie, cocktail," said Echols.