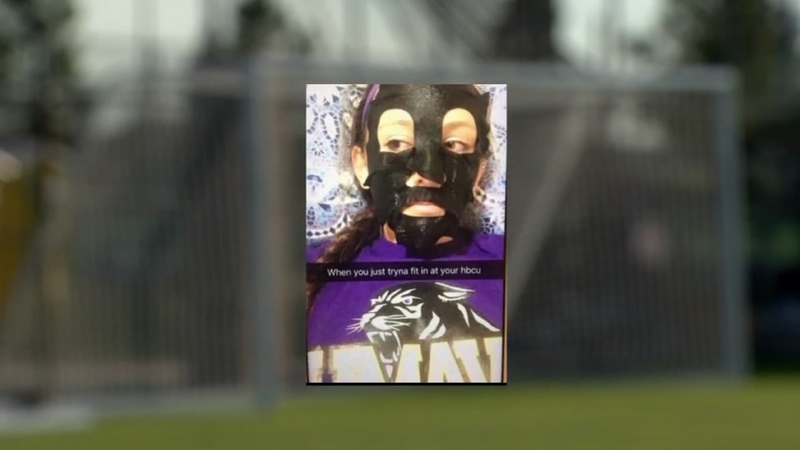 PRAIRIE VIEW, TX (KTRK) -- A Snapchat gone wrong landed a Prairie View A&M soccer player in hot water. In the post, the player poses with her face covered in black tape. The caption on the picture says, "When you just tryna fit in at your HBCU."

The acronym HBCU stands for historically black college or university. There are about 100 of them across the United States. These colleges and universities were established before integration because of laws that kept African American students from pursuing post-secondary education at traditionally white institutions. There are two such universities in the Houston-area: Texas Southern and Prairie View A&M.

Prairie View A&M confirms the student in the picture is freshman goal keeper Brooke Merino. Screenshots of the San Diego, California native have gone viral, and some students and alumni want her kicked off the team.

"She didn't mean anything by it," says PVU junior Kola Ladipo. "It was funny to some people. But as of right now, the way our people are hurting, I don't think it was right."

"Nobody thought it was funny. A lot of people are upset about it," adds PVU alumnus Tracy Smith.

ABC13 spoke with Brooke Merino's father on the phone. He's defending his daughter.

We spoke with a group of freshmen outside the student center that agrees.

"I just feel like she's just taking it as a joke," says Jhovonn Eldridge. "People like to take it overboard on social media and all that. But I don't feel offended by it."

"Honestly I think it's just making us look bad, by the way they're treating her," says Aykesha Sowell. "It wasn't that serious. To me, I didn't really feel offended by it. She's just trying to fit in. Everybody tries to fit in at times."

"I think she didn't understand the history behind blackface and that's why it kinda exploded," explains Darlene Samuels. "But I feel like it's a learning experience for her."

"I feel like they're just criticizing her, but I don't think she knew no better," adds DJ Jordan.

Social media expert and technology strategist Crystal Washington says it can be a learning experience for students and parents everywhere.

"I think any parent that's seeing this story right now, I don't care what your race or background is, should sit down with your kids right now, college age and under, and say 'look let's talk about what kind of things are and are not appropriate to post,'" Washington said.

University President George C. Wright released a statement saying, "whether intentional or unintentional, the actions have the same impact, and as a community, we denounce any racial slight whenever it occurs."

We're told Merino will go before the conduct board Monday. There's also a forum with the president Monday.

Below is President Wright's full statement:

"As a scholar of race relations in the United States and president of Prairie View A&M University, whose alumni, students, and many supporters have experienced firsthand racial insults in the form of words, caricatures and a wide range of other actions, I know clearly the hurt and harm that can be done from intentional and unintentional acts of this nature.

Let me be clear that, whether intentional or unintentional, the actions have the same impact, and as a community, we denounce any racial slight whenever it occurs.

But let us not forget that the First Amendment ensures that discussion of even the most controversial and provocative issues will be vigorous and unfettered on our campus-without it, there can be no search for truth.

We have a duty to educate our community to always try to act in a responsible manner and recognize that speech does have consequences.