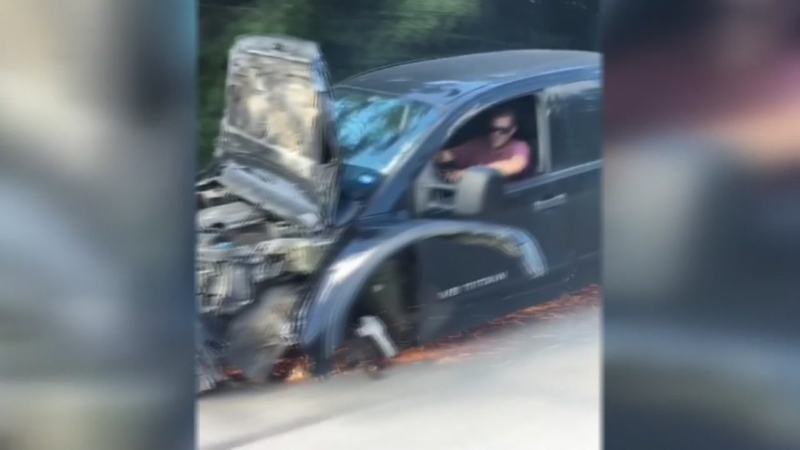 Mangled truck on 3 wheels keeps going to disbelief of drivers

MAGNOLIA, Texas (KTRK) -- It was a horrible sound that caught the attention of Justin Seidel, who said he was stunned to see a mangled truck driving down the street with a missing front tire on Sunday afternoon.

The sight was so shocking, he pulled out his cellphone to take video.

"I was over at the cellular store and had just walked out and heard this horrendous noise," Seidel said.

The man was with his friend and mother and decided to jump in his truck and follow the vehicle that had bad front-end damage, as well as a missing front driver's side tire. He said the mangled truck was pulled over a few minutes later by Montgomery County Sheriff's deputies.

"Sparks were just going everywhere under his truck," he said.

Seidel captured video of the traffic stop, right on the corner of FM-1488 and FM-2978. The footage captures law enforcement vehicles parked behind the mangled truck.

"(The driver) is sitting on the top of the cop car nonchalantly, like nothing happened," Seidel said.

A sergeant with the Conroe Police Department, which is handling the case, told Eyewitness News the man was not intoxicated at the time and had hit a nearby transformer, which badly damaged the truck. Instead of stopping, the man continued driving, according to police.

At this point, no charges have been filed against that driver, but the sergeant explained that could change depending on what the owner of the transformer decides to do.