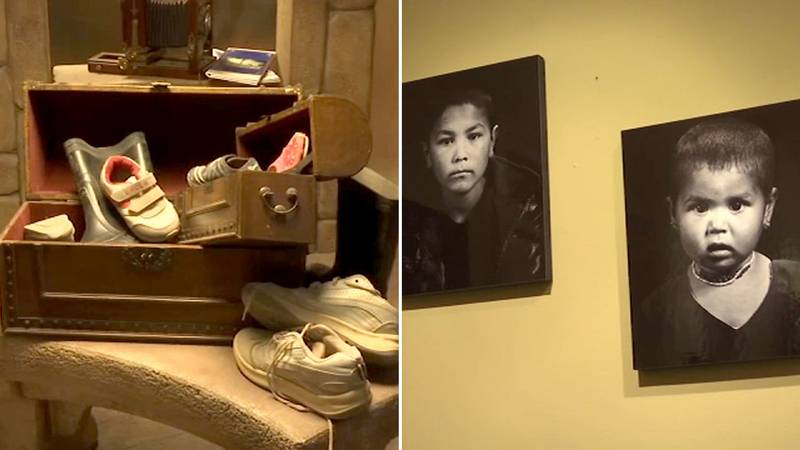 SIMONTON, Texas (KTRK) -- Inside of an art studio housed in a former school house, a one-of-a-kind photograph hangs in a carefully crafted frame.

"We picked shoes because it best represented the children," said Ken Osborne, a photographer. "(It was) the best thing we could possibly work with."

Osborne along with Tomas Ramos, another photographer, collaborated on a project that they risked their lives to create by going to Afghanistan to photograph and meet families impacted by war.

"We basically had to have them smuggled out of where they were at," Osborne said. "They were basically living in Taliban controlled areas."

And the stories these families told: ones of devastation and fear.

The artists began collecting the shoes of the children they met, often learning of the horrific details they've faced in their young lives.

"The children that these shoes belong to really have gone through some terrible things" Osbourne said. "Some of them are dead."

The shoes along with striking portraits are now featured in a gallery exhibit at their Simonton studio.

In addition, a large photograph painstakingly made using gold, platinum and palladium was also created.

The image is of the children's shoes piled in front of the Gate of Charkent, a significant spot for the Afghanistan people.

The process of creating the one-of-a-kind art was so challenging, something never done to a large scale, that Osbourne and Ramos nearly gave up.

"It got so difficult that we almost abandoned this project and do a different kind of print," Ramos said. "But we persisted and found a solution."

The artists showcase details of their process in the exhibit and the photograph will be unveiled at an open house on Dec. 7.

The goal is to sell the artwork and donate the money to an organization assisting those impacted by war.

"But you are there with the people and they are so warm and so welcoming," Ramos said. "And to see someone that has nothing and give everything, it's so unusual."