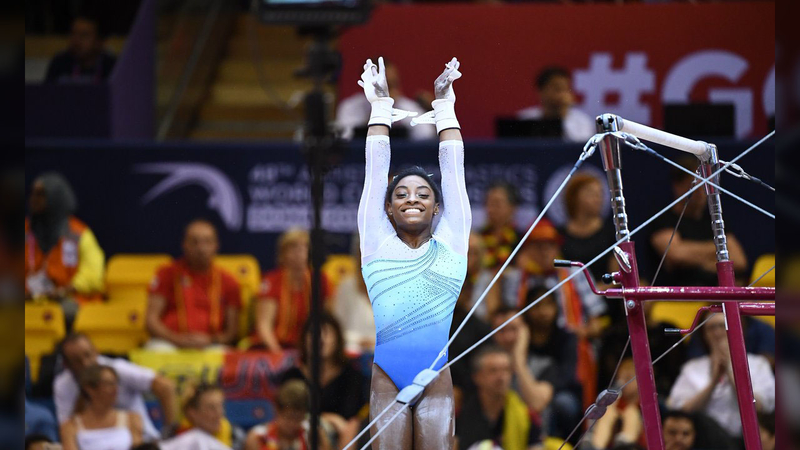 DOHA, Qatar -- Simone Biles is still the best even when she's not at her best.

The 21-year-old star won her fourth world all-around championship Thursday, surviving a series of uncharacteristic mistakes to become the first woman to earn four all-around titles. Biles had a score of 57.491, nearly 1.7 points in front of silver medalist Mai Murakami of Japan.

That's a sizable margin for nearly everyone else, but not for Biles. Battling a kidney stone, she sat down her vault in the first rotation, came off the beam on her third and stepped out of bounds on floor exercise. Yet she still had enough to extend her remarkable winning streak.

Biles has finished first in every meet she's entered since the 2013 US championships, though this one was far tighter than usual.

A spirited effort from Murakami - the first Japanese woman to medal in the all-around final since Koko Tsurumi in 2009 - and bronze medalist and U.S. teammate Morgan Hurd helped. In the end, however, it was Biles against herself.

Not content to simply rely on her remarkable talent, Biles is intent on pushing the sport forward. It's an approach that leads her to put together the most difficult routines and gives her basically a head start in every meet because her start values are so high.

For once, Biles needed the cushion to pull through.

Nearly a year to the day since she returned to the gym following a well-deserved sabbatical after her five-medal haul at the 2016 Olympics, Biles came into the all-around final at the height of her considerable powers. She put on a spectacular display during qualifying, her total of 60.965 - 4.5 points clear of Hurd - made all the more startling considering she revealed she's battling a kidney stone she's jokingly called "the Doha Pearl."

It was more of the same during team finals, when Biles served as the anchor on all four events as the Americans cruised to their fourth consecutive world championship with ease.

Yet the casual dominance Biles has won with for a half decade evaporated in the desert.

Most meets with Biles typically start the same. She drills the vault - where she is the reigning Olympic champion - and then spends the next three rotations simply padding her lead to margins that look like typos.

Not this time. Attempting "the Biles" - a roundoff, half-twist onto the table, front double full off typically done by men - her left arm barely touched the table, causing her to under-rotate. She landed and promptly sat down, forcing her to play catch up. Known for getting angry after mistakes, she responded by drilling her significantly improved uneven bars set, drilling her double-twisting double-somersault dismount to move slightly in front of Hurd halfway through.

Then things got weird. Biles hopped off the beam early in her routine then grabbed the four-inch piece of wood later when she had trouble landing a front flip, a sequence she struggled with during qualifying.

The miscues gave the rest of the field a small opening. One no one in the rest of the top six could get through. Hurd wobbled twice during her set, leaving Biles a slim margin of .092 over Belgium's Nina Derwael heading to Biles' signature event.

Murakami's excellent floor routine put pressure on Biles, but only a little. Needing a 13.308 to win, her 15.000 was the best on the floor by a full point even though her right foot went out of bounds during the end of her intricate opening tumbling run.

Not that it mattered. In the end the meet finished the way they have always finished for the last five years when Biles is involved: with her atop the podium standing above a sport that is desperately trying to keep up.
Report a correction or typo
Related topics:
sportsgymnasticsu.s. & worldsimone biles
Copyright © 2022 by The Associated Press. All Rights Reserved.
TOP STORIES
Uvalde school shooting: What we know about 19 kids, 2 teachers killed
Timeline breaks down Uvalde shooter's movements day of massacre
Uvalde man says his daughter was killed trying to call 911 on shooter
Senate GOP blocks domestic terrorism bill and gun policy debate
'Goodfellas' and 'Field of Dreams' actor Ray Liotta dies at 67
Lockdown lifted at Houston ISD's Stephen F. Austin HS
Teen dies 2 days shy of 16th birthday after being shot, sheriff says
Show More
Great news on the drought, but rain chances look slim the next 10 days
More firearm dealers than mental health providers in Uvalde
Onlookers urged police to charge into TX school: 'Go in there!'
'American Pie' singer Don McLean pulls out of NRA convention
Officials: Buffalo, Uvalde shooters allegedly abused animals
More TOP STORIES News