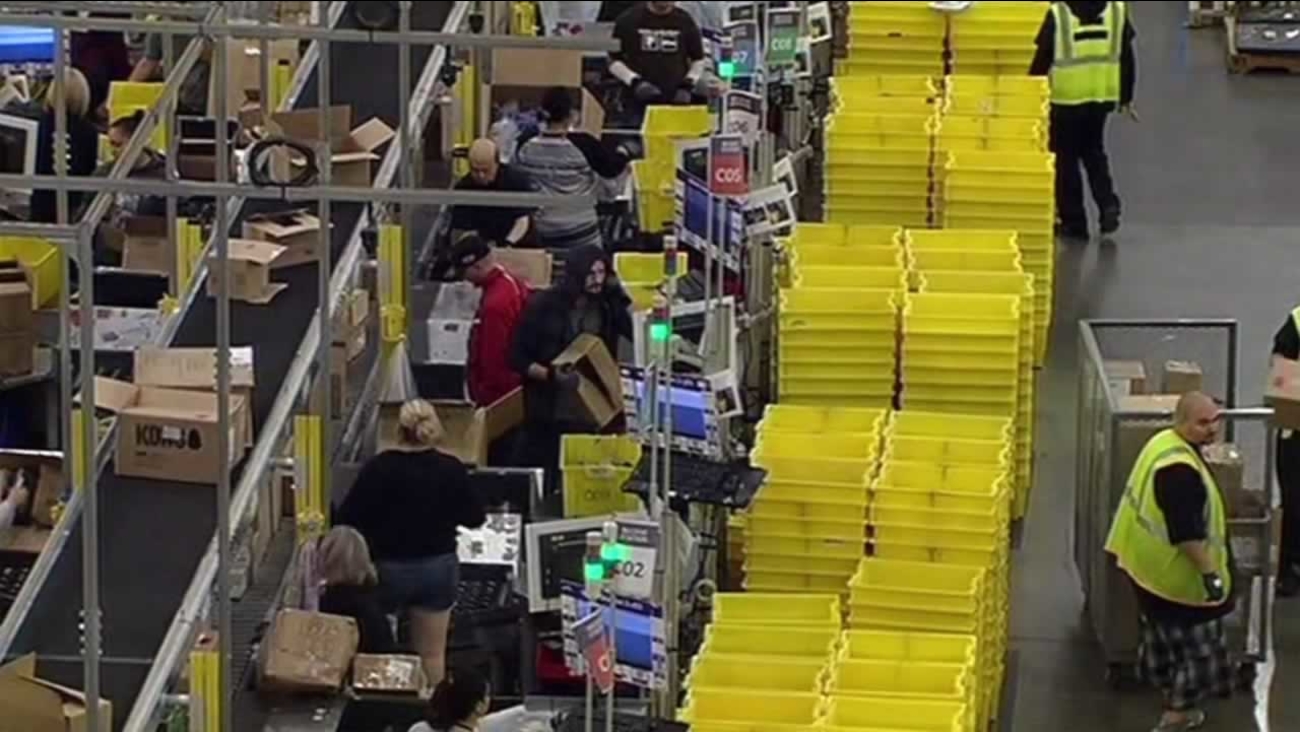 NEW YORK -- More often shoppers are making the decision to sit on their couches rather than head to stores this holiday season.

Online sales growth so far this holiday season is surpassing growth in sales at physical stores, according to First Data, which analyzed online and in-store payments from Oct. 31 through Monday.

Sales growth for stores is up 2 percent, while online sales rose 4.6 percent, according to First Data, which declined to give dollar figures, citing proprietary reasons.

Total spending, including sales in both physical stores and online, climbed 2.4 percent, stronger than the 1.8 percent growth during the same period last year.

While physical stores still account for the majority of spending, the uneven growth between buying at locations and on websites signals the continuation of a big shift in how U.S. consumers are shopping.

This season, Mother Nature appeared to provide an extra lift to online sales, analysts said. While unseasonably warm weather has hurt overall sales of cold-weather items, it appears to be driving more shopping to buy on their PCs or mobile phones since they don't want to waste a pleasant day inside a mall.

"Store traffic is down everywhere, and it's compounded by the weather," said Steven Barr, U.S. retail and consumer sector leader for PwC. "We do believe that warm weather is driving consumers online."

The big question, he asks, is whether warm weather is the number one reason or a secondary reason shoppers are heading online this season.

The overall shift to online spending is largely due to more retailers working to improve their websites and offer speedier delivery on orders placed online. As a result, shoppers, who increasingly are looking for convenience, are spending more of their holiday budgets online.

That's led to a big gap in some product categories between online and physical stores. According to First Data, clothing and accessories stores had a 2.9 percent sales decline so far this season, compared with a 3.7 percent increase online. Furniture and home furnishings store sales slipped 0.5 percent, while online increased 8.1 percent.

And while the average order for key product areas remained largely the same as last year, clothing and accessories got hit hard because of deep discounting. Stores have needed to ramp up price cuts to get rid of excess goods amid the mild temperatures that have extended into December. As a result, the average ticket size for those products went to $88.30 from last year's $83.43.

Amy Kemper said she's been shopping more online because of the convenience of doing so. Her family travels for the holidays, and it's easier to buy online and then have things shipped to where they are going.

"I do come to the mall to look around and see what's out there and then go back online," said Kemper, who lives in Indianapolis.

First Data doesn't make predictions for holiday sales. But the National Retail Federation, the nation's largest retail trade group, expects sales for November and December to rise 3.7 percent to $630.5 billion. There's still plenty of time for that estimate to come true: Christmas is a week away, and there are some of the biggest shopping days left.

And as cutoffs to order online to get gifts shipped to stores approaches, retailers are relying on die-hard traditionalists like Ann Rabbit during the final stretch.

Rabbit picked up a sweater for herself for 40 percent off at Old Navy in East Harlem in New York on a recent weekend.

"I don't do online. I like to touch things," she said.