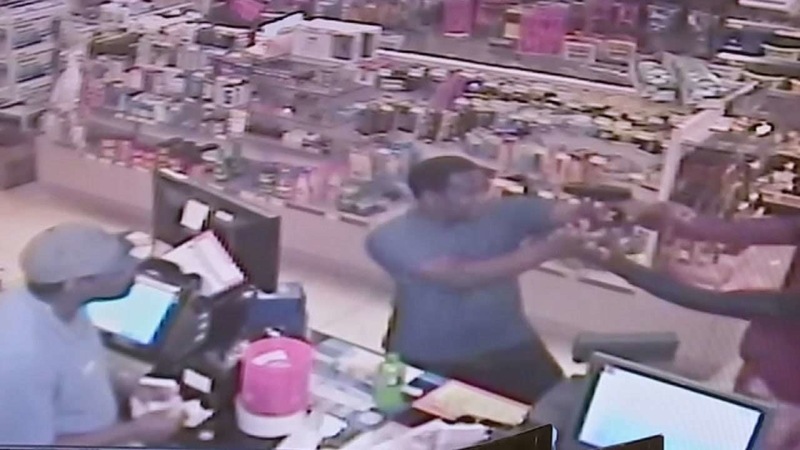 HOUSTON (KTRK) -- Joe Hillsman visited a convenience store at 2900 Almeda-Genoa in southeast Houston almost daily, so much so, the staff knew him.

"They know him by name and so he always went up there. I believe the guy's name was Steve. He said, 'I'm going up to Steven's.' He would never say, you know, the convenience store," said Nakia Hillsman, Joe Hillsman's sister.

On Tuesday night, Hillsman went to buy a lottery ticket at the store. Then surveillance video shows two armed men walk in. One of the suspects walks up to Hillsman and points a gun at his head. A struggle followed and Hillsman gets the gun from the suspect. Then the second suspect fires his gun, hitting Hillsman in the side. Officers say the two crooks ran out of the store and got into a getaway car.

The store has a very good security camera system and managed to capture images of both suspects.

The first suspect is described as a black male wearing a skin-tight red hoodie with black stripes down the arms, and another black stripe down the hood. He also was wearing red or pink pants with words written on them.

The second suspect is also described as a black male wearing a black jacket with a blue ski mask, gray pants and black shoes.

Police have recovered the gunman's weapon, which police say was dropped at the scene during the struggle with the victim.

Hours after the shooting, Hillsman father, Joe Hillsman Sr., said his son was a good man. "He went to work every day. He was a good kid. I am talking about, could not have had a better son than that. I would not even want to ask for nothing better."

A man who did not want to give his name was in the store moments before the shooting and says it easily could have been him or anyone else. He said, "I was praising God, I was like, 'Lord, I thank you.' It could have been me."

"He was minding his own business and they killed him for nothing. So please, turn yourself in. Turn yourself in. You took somebody's life," said Angela Hillsman, Joe Hillsman's cousin.