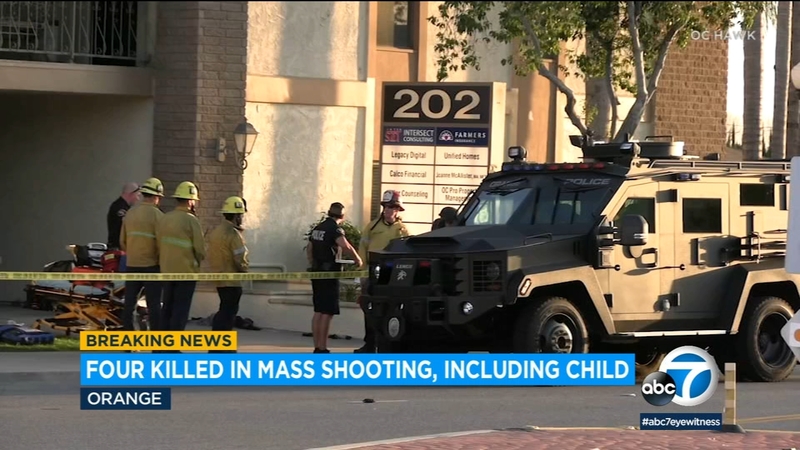 LOS ANGELES -- Southern California police said Thursday the gunman who killed four people and wounded a fifth at an office complex knew all the victims either through business or personally.

Orange police Lt. Jennifer Amat also revealed that the gunman had chained gates to the complex closed, forcing officers who responded Wednesday to engage him from outside. Police withheld the identities of the dead but said one was a 9-year-old boy. The others were a man and two women.

The gunman was also wounded and hospitalized. Wednesday's shooting happened in the city of Orange southeast of Los Angeles. When officers arrived, shots were ringing out at the building that includes a mobile home brokerage.
This is a breaking news update. A previous version of this report is below.

A child was among four people killed Wednesday in a shooting at a Southern California office building that left a fifth victim wounded and the gunman critically injured, police said.

The violence in the city of Orange southeast of Los Angeles was the third U.S. mass shooting in just over two weeks.

When police arrived at the two-story building at about 5:30 p.m., shots were being fired, Orange Police Lt. Jennifer Amat said. Officers opened fire and the suspect was taken to a hospital, Amat said.

It was unclear whether the suspect suffered a self-inflicted wound or was shot by police. Police provided no details about the victims other than to say one was a child and a that woman was critically wounded.

California Gov. Gavin Newsom in a tweet called the killings "horrifying and heartbreaking."

"Our hearts are with the families impacted by this terrible tragedy tonight," he said.

Amat had no information about what may have prompted the attack. She said the shooting happened on both levels of the building.

Signs outside indicated a handful of businesses are located there - including an insurance office, a financial consulting firm, a legal services business and a phone repair store.

People gathered outside the building after the shooting hoping to get word about loved ones.

Paul Tovar told KTLA-TV that his brother owns a business in the building, Unified Homes, a mobile home broker.

Charlie Espinoza also was outside the building and told The Orange County Register that he could not reach his fiancee, who works for a medical billing company.

Cody Lev, who lives across the street from the office building, told the newspaper he heard three loud pops that were spaced out, then three more. There was a period of silence and then Lev said he heard numerous shots, followed by sirens and more shots.

A Facebook livestream posted by a resident who lives near the office appeared to show officers carrying a motionless person from the building and officers helping another person.

"The first words I heard after the shots were fired were 'Don't move or I will shoot you,'" Smith, 64, recounted Thursday morning.

Smith said he heard that repeated twice more by a man's voice and believes it was a police officer speaking. He did not hear other voices or more shots. He later peeked over the fence and saw SWAT officers marching in a line in the building's courtyard.

"It saddens me so much," he said. "A senseless loss of life."

The killings followed a mass shooting at a supermarket in Boulder, Colorado, last week that left 10 dead. A week before that, six Asian women were among eight people killed at three Atlanta-area spas.

"Enough is enough," U.S. Sen. Dianne Feinstein, D-California, tweeted. "We have to do something about the guns on our streets."

Orange is about 30 miles (48 kilometers) from Los Angeles and home to about 140,000 people. Amat said the shooting was the worst in the city since December 1997, when a gunman armed with an assault rifle attacked a California Department of Transportation maintenance yard.

Arturo Reyes Torres, 41, an equipment operator who had been fired six weeks earlier, killed four people and wounded others, including a police officer, before police killed him.

The video in the media player above was used in a previous report.
Report a correction or typo
Related topics:
californiadeadly shootingfatal shootingmass shootingshootingu.s. & world
Copyright © 2021 by The Associated Press. All Rights Reserved.
MASS SHOOTING 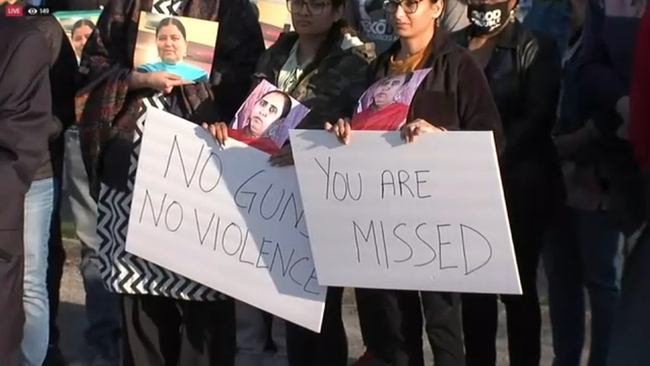