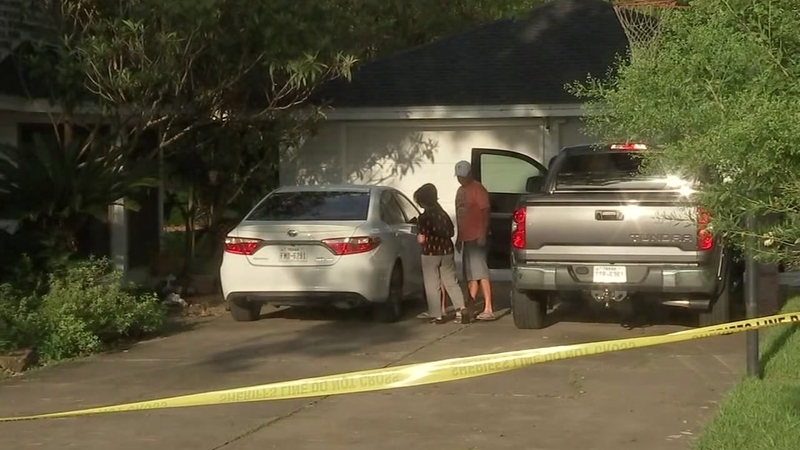 HARRIS COUNTY, TX (KTRK) -- A man suspected in several break-ins was shot by a homeowner during an alleged home invasion in Huffman.

The shooting happened outside a home on Spanish Trace Street in northeast Harris County.

The Harris County Sheriff's Office says the intruder took a brick from the landscaping outside the home, and hurled it through the window of the front door.

The homeowner heard the glass shatter and grabbed his gun.

When the homeowner came to the front door, deputies say he saw a man reaching inside to try and get into the home. That is when the homeowner fired off two shots, hitting the alleged intruder.

The homeowner's pregnant wife was inside when the alleged home invasion began.

Fortunately, she is alright and there were no injuries.

LifeFlight took the suspect to the hospital. We do not yet know his condition.

Several other homeowners have since come forward, claiming he is the same man who broke into their vehicles overnight.

One person tells Eyewitness News the man who was shot had also broke into their pickup truck, stealing a 9MM handgun.

When the truck owner heard the alarm go off, he grabbed a gun and went outside the confront the suspect. He says he found the burglar breaking into his neighbor's truck at that point.

He yelled, scaring the suspect off into the woods nearby.

Officers were able to reunite the pickup truck owner with his 9MM this morning.

Keep checking back on this page to get real-time updates as this story unfolds. To get alerts for breaking news, download the abc13 news app for iPhone or Android. You can also get breaking news alerts sent to you by email.
Related topics:
huffmanshooting
Copyright © 2022 KTRK-TV. All Rights Reserved.
TOP STORIES
Daylight shows home destroyed after standoff with shooting suspect
What we know about man accused of shooting 3 HPD officers
Widow delivers heart-wrenching eulogy for NYPD detective
Suspect arrested after 30-minute chase ends on I-45 in Texas City
Rainy Monday and arctic cold front on the way after sunny weekend
5 people charged in connection with Pct. 5 corporal's murder
How many times can I reuse my N95 mask?
Show More
Decades after TV anchor disappears, convicted rapist denies connection
Driver dies after slamming into 18-wheeler's trailer on US-59
Woman shot in the shoulder during robbery set up in SW Houston
Prepare for a major closure at I-69 and 610 West Loop this weekend
Officers escort body of corporal killed in ambush to funeral home
More TOP STORIES News