Teen who shot HPD officer was out on bond: Records 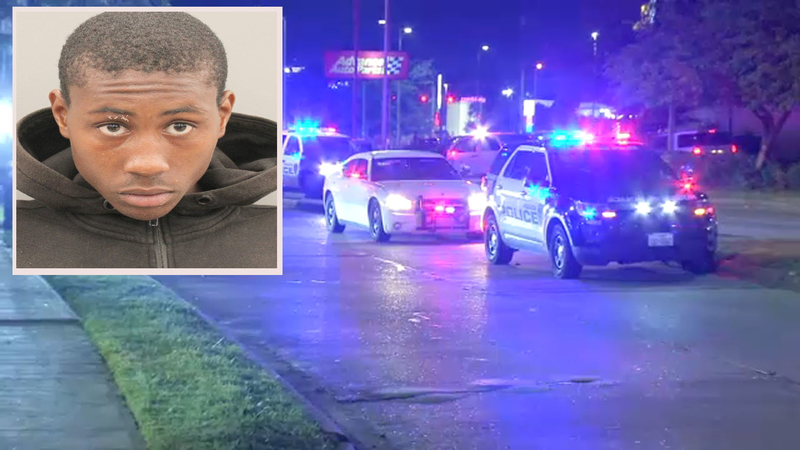 HOUSTON, Texas (KTRK) -- A 29-year-old Houston police officer is out of surgery and walking after being shot by a suspect on Thursday. The surgery lasted five hours, according to Joe Gamaldi.

Our officers resilience/strength is absolutely incredible. After being shot multiple times, going through a 5hr surgery less than 48 hrs ago, he’s already up and walking. He is a testament to the strength of our officers and our City. As his father put it,he is a Walking Miracle.

Gunshots rang out at Tristan and Scott Street around 10:26 p.m. Thursday in southeast Houston.

When the smoke cleared, one suspect was dead, a 5-year member of the Houston Police Department was shot three times, and officers had arrested two other suspects, who are facing charges.

The dead suspect has been identified as 17-year-old Brandon Bell, confirmed by his family. The mugshot above is from a previous incident earlier in the month, where he allegedly carjacked a campaign worker.

Bell was scheduled to appear in court for the carjacking incident two days before the officer involved shooting happened, according to records.

He was out on PR bond for a criminal trespassing charge related to the same incident.

Police believe Bell is the one responsible for shooting the HPD officer with his own weapon.

One of the suspects in custody is also 17 years old, HPD Chief Art Acevedo said.

A fourth suspect is still on the run.

RELATED: What we know about the HPD officer shot during violent night on Houston's south side

Acevedo said the suspects' crime spree started with a carjacking at the Valero station at 5820 Scott St. near Griggs Road.

Four carjackers who tried to shoot a priest were met with force, ending in a deadly shootout with officers, police say.

Four black men approached the driver of a 2003 Chevy Tahoe and took the vehicle at gunpoint, Acevedo said.

What they didn't know is the Tahoe was out of gas. When the vehicle sputtered to a stop, police say the four suspects abandoned the vehicle at 6200 Tierwester and fled on foot.

About 10 minutes after the carjacking, Acevedo said the suspects held up a priest in a parking lot on Meriburr Lane.


"A priest. You heard that right. A priest in the parking lot was approached by four black males," Acevedo said.

He said the men pulled the trigger twice, but the gun jammed. That is when the priest was beaten. The suspects took his two cell phones before taking off.

"This priest has indicated he was on his knees praying for his life," Acevedo said.

The priest has been identified as Father Desmond Ohankwere.

Ohankwere told ABC13 he only had his rosary with him during the incident. His arm was injured when he fell during the attack.

Father Desmond Ohankwere only had his rosary with him when he was attacked by the four suspects who were on a crime spree. You can see the injury to his arm caused when he fell during the attack. pic.twitter.com/T7Hyn0rGxi

Shortly after that, officials say the suspects went up to another victim in her driveway, this time a woman sitting inside her F-150 truck.

The suspects knocked on the window with a pistol, ordered her to get out of the vehicle, and robbed her of her cellphone and purse.

At 10:21 p.m., after receiving two reports of the suspects, officers in an unmarked unit spotted the men on Tierwester, near a Chase bank.

HPD Chief Art Acevedo has asked for the public to continue to pray for his officer.

Officers chased the suspects, still running on foot. About five minutes later, an officer exchanged gunfire with a male suspect. The man was pronounced dead at the scene.

"It does appear they were on a violent spree, but of these four, two are in custody, one is DOA and one is on the run," Mayor Sylvester Turner said.

Investigators say they are not sure if one or two officers opened fire on the suspects.

Acevedo said early Friday, with Mayor Turner standing by his side, that he is tired of the gun violence facing Houstonians, and especially law enforcement.

"I don't want to hear from politicians tomorrow about how much they care about my cop. If they aren't here to talk to us about solutions, don't bother showing up at the Houston Police Department," Acevedo said. "We speak out, and either you do something or don't show up. We don't need you here if you're just going to say universal background checks that help keep guns in the hands of law-abiding Americans of sound mind is not for Texas or this country."

One officer has been shot following a scene at Scott at Tristan at 10:35 p.m. The officer has been transported to an area hospital. One suspect is in an unknown condition. This is an active scene avoid the area. Further updates will be tweeted. #hounews

We have one of our officers who has been shot on the 3900 block of Tristan at Scott. He has been transported to @memorialhermann by @HoustonFire. Please pray for our officer. We also have one suspect down, others in custody and are looking for more. Please stay in hour homes.

Acevedo said the officers involved in the shooting were wearing body cameras.