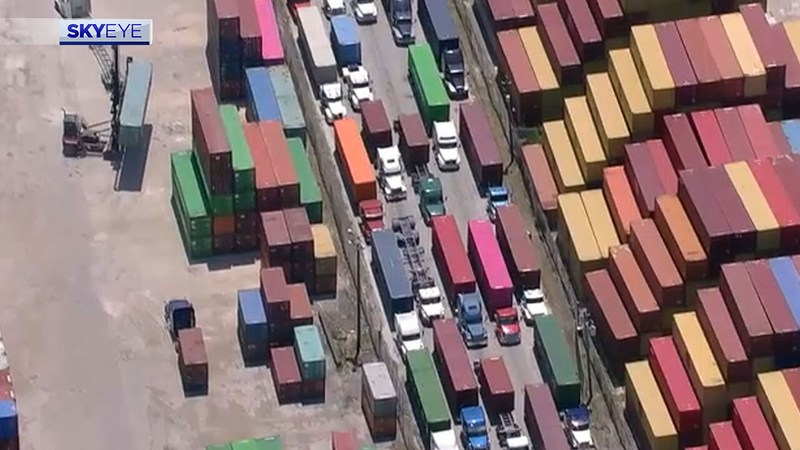 HOUSTON, Texas (KTRK) -- Two public container terminals at the Port of Houston will reopen Thursday afternoon after being closed for a few days due to a hardware failure, according to officials.

According to an update, the Bayport and Barbours Cut container terminals will reopen at 3 p.m.

7/29/21 12:35 pm Update: Bayport and Barbours Cut Container Terminals are planning to open today at 3:00 pm to truck traffic. You now have access to Lynx and N4. API and EDI are able to be exchanged. Check back for another update soon about final gate operation decisions. pic.twitter.com/9Rzw10lIOs

The issues were first reported at both terminals on Tuesday, just before the gates were set to open at about 7 a.m.

In a letter, Port of Houston executive director Roger Guenther explained that's when they experienced a "major failure of the storage devices that support all applications used to operate" the terminals.

Although staff were able to get the terminals working again by 10 a.m. Tuesday, their backup procedures failed around two hours later.

Since then, the terminals were inoperable.

Ships that were already in the loading and unloading process at the time were able to continue working, Guenther said. But new vessel starts weren't possible for a while as the truck gates at both container facilities were idle.

Guenther said in the letter that the port has the necessary hardware, but getting things back up and running was a different story.

The configuration and restoration of all the components involved was a slow process overall.

Now that the terminals are resuming operations, port officials plan to have daily extended gate hours including weekends, Guenther said.

It's also the largest petrochemical complex in the country.

The 52-mile ship channel is comprised of more than 200 private and eight public terminals.

Guenther stressed that the issues had no impact on the greater ship channel, adding that the problem was confined to only the two public container terminals.