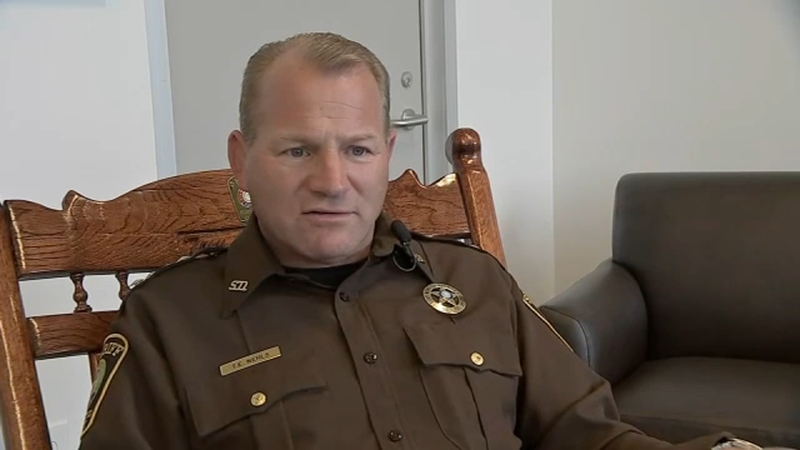 RICHMOND, Texas (KTRK) -- Outgoing Fort Bend County Sheriff Troy Nehls is staying put in office after he claimed a "witch-hunt" in the county commissioners' court wanted him out before his term expires next year.

The outspoken sheriff, who this past summer announced he will not seek another term, revealed in a tweet that a meeting was set Tuesday to discuss his possible ouster.

He further said the move was politically motivated.

"The Dem County Judge has even met with other Dems to choose who 'he' would appoint to replace me. I've done nothing wrong. A Dem-led witch-hunt has now entered FBC. Sad!" Nehls tweeted.

The FBC Comm Court intends to discuss removing me from office today at their 1p meeting. The Dem County Judge has even met with other Dems to choose who “he” would appoint to replace me. I’ve done nothing wrong. A Dem-led witch-hunt has now entered FBC. Sad!

At issue, according to the court, was Nehls' decision to form an exploratory committee for a U.S. House run and whether that broke any rules for a sitting elected official.

It's related to what's called "right to run." If you hold an elected position, like Sheriff Nehls, and have 13 months or more on your term and then announce plans to run for a different office, you must resign immediately. Nehls has more than 13 months on his term but hasn't announced plans to run for another position. He has said he's formed an exploratory committee.

Commissioners told ABC13 that no action was taken since there weren't any laws broken.

Nehls reaffirmed that he is, at least for the moment, not running for Congress, but simply exploring the proposition.

"I have no intent and I will not resign my position as sheriff to run for Congress. I've never said I was running for Congress. I formed an exploratory committee and I'm testing the waters. I'm seeing over the next 60 days, would I be a viable candidate for Congress," the sheriff explained.

So what brought up the court meeting with Nehls' position on the agenda? According to Fort Bend County Judge KP George, a constituent raised concerns over whether Nehls was in his position illegally.

"We wanted to make sure that the constituent e-mail, whether it was valid, whether there was no value to it. We wanted to be absolutely clear about it. So our county attorney advised this. The best way to this: put on the agenda and discuss in closed session. And that's exactly what we did," George said.

Still, Nehls had another concern.

"I've heard, just through the rumor mill, is that our county judge is out there talking to other individuals about the potential appointment as the Fort Bend County sheriff," said Nehls.

The judge said that's not true and he has many other things to focus on.

"Absolutely not, that's also my job," said George. "It's not my job to find the next Fort Bend sheriff in case there's a vacancy."

Back in July, Nehls stated he would not seek another term as sheriff after seven years in office. He was the Fort Bend County Precinct 4 constable for two terms before that. Shortly after the decision, he formed an exploratory committee to seek the U.S. House seat in Texas District 22.

During his time as sheriff, Nehls ran into controversy in 2017 when he was involved in a situation involving a woman who had a "F(expletive)" sign displayed on her truck.