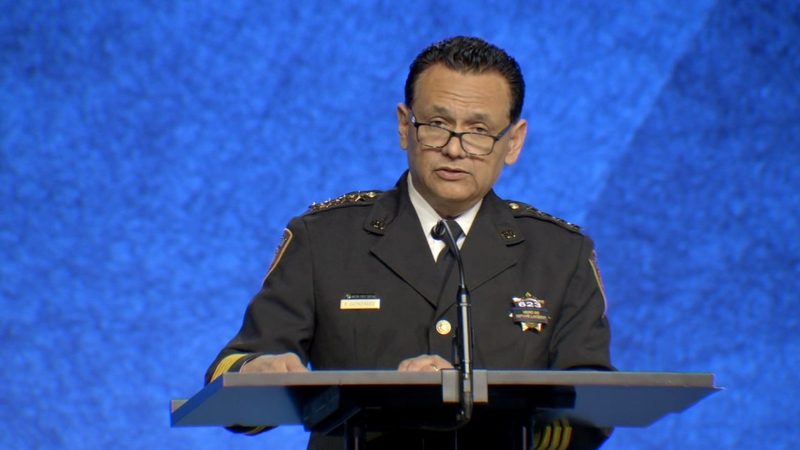 Sgt. killed in crash with accused DWI driver laid to rest at funeral

Among several speakers at the funeral, Sheriff Ed Gonzalez spoke on his memories with the sergeant. You can watch his remarks in the video player above.

Our hearts are heavy as we prepare to lay another brother to rest, Sgt. Ramon Gutierrez Jr. May he Rest In Peace. pic.twitter.com/jY3mB5wHuV

The 45-year-old was killed two weeks ago when his motorcycle was hit by a suspected drunk driver on the Beltway. He was directing traffic as an off-duty motorcycle escort for an oversized load.

Gutierrez was married to his high school sweetheart, and together, they had three children, including a daughter who was set to be married in a couple of months.

WATCH MOMENTS FROM THE PROCESSION: Dozens of law enforcement officers were seen paying their respects as the body of Sgt. Ramon Gutierrez was transported to the funeral home.

He served with the sheriff's office for 20 years. Of those, Gutierrez spent the last 13 years with the Vehicular Crimes Division.

The celebration of life for Gutierrez was held at The Woodlands Church Friday morning.

The driver in the crash, Lavillia Spry, has been charged with intoxication assault manslaughter, failure to stop and render aid involving death and evading arrest. A judge set her bonds at a total of $275,000 for the three charges.

She's accused of taking off from the scene after the deadly crash, but she was later stopped by another deputy and arrested.

We've learned the sergeant had a daughter who was set to be married in a couple of months, and he was picking up extra jobs to help with the wedding.