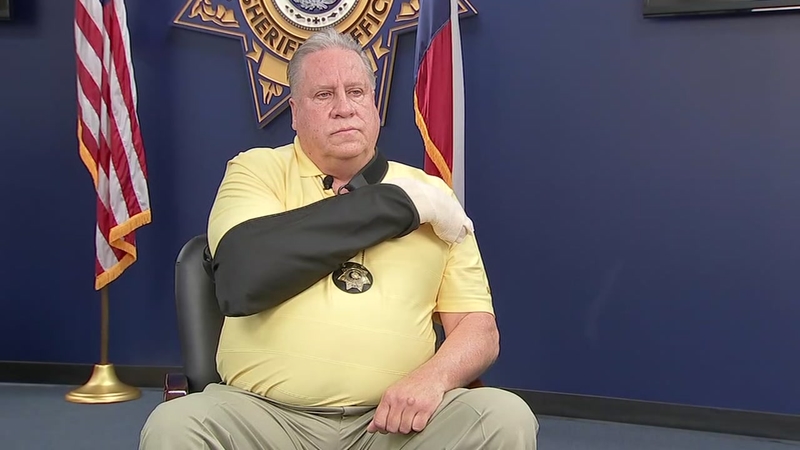 Sgt. James Smejkal is speaking out for the first time about what led to the shooting and his time in the hospital.

HOUSTON, Texas (KTRK) -- Sixteen days after he was in a shootout with a suspect wanted for violating a protective order, Harris County Sheriff's Sgt. James Smejkal said he plans to return to a job he's had for nearly 30 years.

A 9mm bullet remains in his lower arm, and a metal plate was surgically implanted to hold the shattered bones together.

Two agents of the Texas Attorney General's Office were wounded as well. One was shot eight times, including in his torso, and is still recovering. The other officer was shot in the leg.

"It wasn't until we went down the hallway that the shooting started," Sgt. Smejkal said.

Suspect Daniel Trevino was located in a house in northeast Harris County.

"The defendant was firing the gun as fast as he could and shooting the gun everywhere," he said.

Sgt. Smejkal says he was unable to fire his gun, but he made his way out of the house.

Trevino got away but was found by other law enforcement.

Following a 5-hour standoff, he took his own life.

"Everytime we go out to serve an arrest warrant, we take our chances. We've found people hiding in closets, under beds," he said.

The hardest thing that day, he said, was calling his family to tell them he'd been shot.

He intends to return to work in the new year, as soon as he's cleared for duty.