KTRK
HOUSTON, Texas (KTRK) -- Authorities have released new information as they continue to search for the man accused in the brutal sexual assault of a 19-year-old woman.

During a press conference, authorities say the 19-year-old victim was walking on Dec. 29 after leaving a restaurant near Buffalo Speedway.

The woman told police she remembers that, while walking home, she felt someone was behind her. When she looked back, she saw the suspect was at a distance but he got closer to her as she approached South Braeswood.

Police say the suspect then walked up behind the victim, attacked her and began strangling her. The suspect sexually assaulted her and then took off with her belongings, including her wallet, phone, and debit card. According to authorities, the victim also lost consciousness during the attack.

After the assault, the victim ran across the street and talked to the neighbors who stayed with her until officers arrived.

Police also hope they can find the witness who may have seen the incident at the time but was waved off by the suspect.

"There was a vehicle, according to her," an investigator said during the press conference. "Maybe it slowed down or stopped and the suspect turned and said, 'No, we're good. We're friends, we're doing something.'"

According to investigators, the victim tried to get up and wave but the suspect would not let her.

Police said they are searching for a black man with a small build, who's 20 to 25-year-old, weighing 140-150 pounds, and has braided hair. He was last seen wearing a white shirt and white pants.

If you know anything about this crime, you can report it anonymously to Houston Crime Stoppers at (713) 222-TIPS.
Report a correction or typo
Related topics:
houstoncrimestranglingattackwoman injuredwoman attackedwoman assaultedcrimestopperscrime stopperssexual assault
Copyright © 2020 KTRK-TV. All Rights Reserved.
CRIME STOPPERS 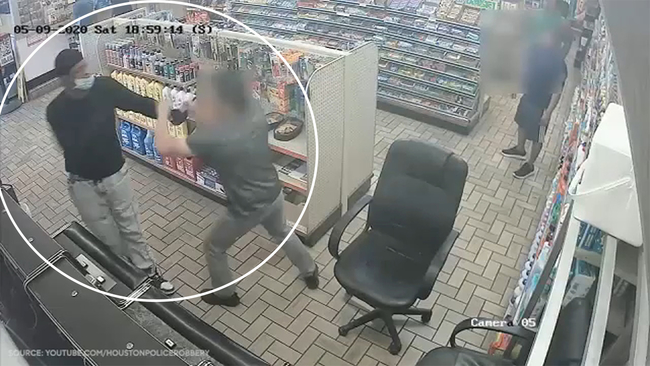