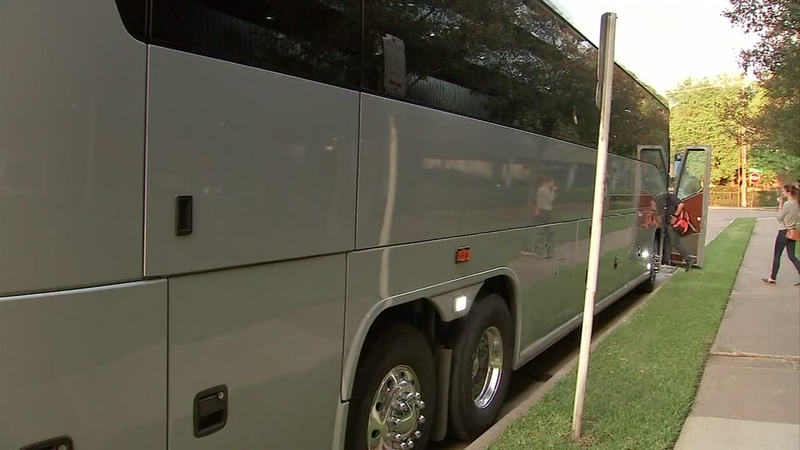 HOUSTON (KTRK) -- It's widely known that Houston has been a hub for human trafficking.

The nonprofit, Children At Risk, took a group of about 40 people on a bus tour Thursday night to shine a light on the problem.

They took the tour group to about a dozen known or suspected human trafficking hot spots around southwest Houston. Some of the places have been shut down because of trafficking, and others have been flagged. They hope more people will notice the places that are right under their noses.

James Caruthers and the staff at Children At Risk lead the task of taking a bus load around the city several times a year.

Before Thursday's tour, they explained the ins and outs of trafficking. Then, the group hopped on a bus to see where the trafficking is happening.

"I think the primary thing we want people to know is it's here and it's happening and it's right in front of you," Caruthers said.

People drove from near and far for the tour.

Deborah Pfluger and her daughter came from Austin where they're starting a nonprofit.

"Our focus is going to be prevention and education programs for kids ages 8-18 to help them understand the risks, and how to prevent getting caught up in this sex trafficking trade," she said.

That was eye-opening for Anthony Renwick, an aspiring attorney who plans to focus on human trafficking. He came from Dallas.

"I wouldn't say it was too surprising, but sobering at the same time because it is an epidemic that does go around especially in the area of Texas," Renwick said.

The final stop was on the south side: a brothel once known as Las Palmas II where girls as young as 14 were forced to have sex for money - sometimes at gunpoint. In 2015, it was the site of the largest human trafficking bust in Houston.

"We want people to become more aware of where it's happening. We want them to then take that awareness and channel it into advocacy," Caruthers explained.

He urges anyone who's concerned about human trafficking to contact their congressmen, state representatives, and city council members.