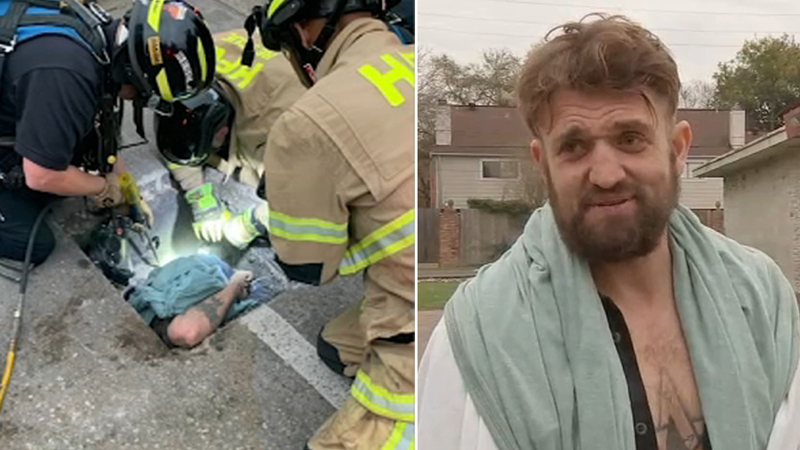 Houston man gets stuck after traveling down sewer line

HOUSTON, Texas (KTRK) -- A man had to be rescued after traveling about 100 yards down a sewer line and getting trapped in southwest Houston.

Firefighters were called out to the area of Fondren and South Braeswood Sunday morning, where they saved Dylan Bryant.

Bryant told ABC13 he was exploring at a nearby bayou and traveled about 100 yards down a sewer line when he became trapped.

"I can't go back because of how I had to scooch through," Bryant explained. "I'm in the middle of open raw sewage in this little bitty box."

He screamed for help and a man passing by heard him.

"He was walking by and he was like, 'Is somebody talking to me? Is somebody there?' And I go, 'Hey man, down here!' Like something out of the Ninja Turtles," Bryant told ABC13.

The man who heard Bryant then alerted a woman nearby. She called 911.

Bryant calls both of them saints.

He also had a message for his family after the rescue. "Sorry, dad. I know you'll probably be embarrassed."

Houston firefighters at work: Crews from Stations 10, 24, 51, 68 and 82 rescued a man from a sewer line near Fondren Rd. and S. Braeswood Blvd. A 911 caller reported hearing his yelling. The rescued man said he had gone "exploring" near the bayou >100 yards down the sewer line. pic.twitter.com/nas5t7MLTM