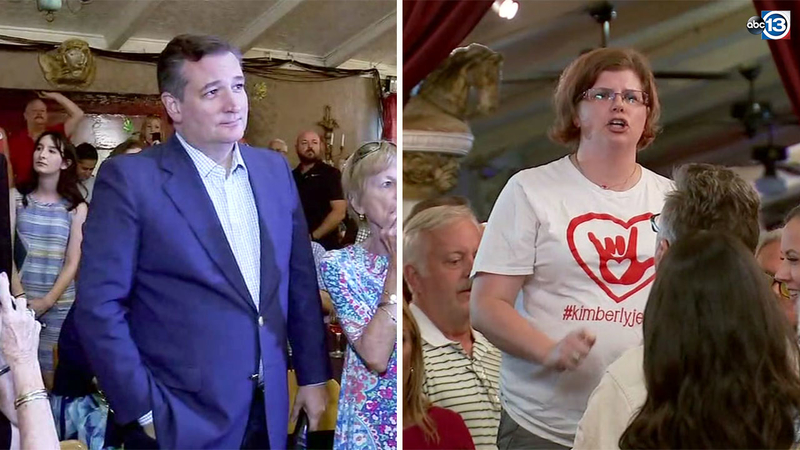 WEBSTER, Texas (KTRK) -- There was an explosive moment at a Ted Cruz rally Thursday night in Webster when the mother of a Santa Fe High School shooting victim confronted the senator in front of his supporters.

Some in the crowd reacted harshly. Cruz, a Republican, calmed them down and offered his condolences.

"You still have not introduced common-sense reform," Hart yelled.

She told Eyewitness News she came specifically to confront Cruz.

"I wanted to be able to call him out. His inaction regarding the children of Santa Fe. Children died under his watch and he accepts money from the NRA. There is still not any sort of common-sense reform," she said.

Cruz drove to Santa Fe from Houston the day of the shooting and met with victims. He had also participated in a roundtable discussion in Austin about school safety.

"I think the number one thing that makes schools safer is to have more armed police officers on campus to keep schools safe," he told supporters to cheers.

The rally was the 22nd he's held in the last three weeks. Polls conflict on who is ahead between him and challenger Rep. Beto O'Rourke, a Democrat from El Paso. O'Rourke talked to students at Prairie View A&M Wednesday night and is giving Cruz a tough race.

"Our biggest danger is complacency. We've got a fight on our hands," Cruz said to chants of "Veto Beto."

The senator and congressman will be in Dallas on Friday for their first debate.

"I think the debate tomorrow will focus on our different records," Cruz said.