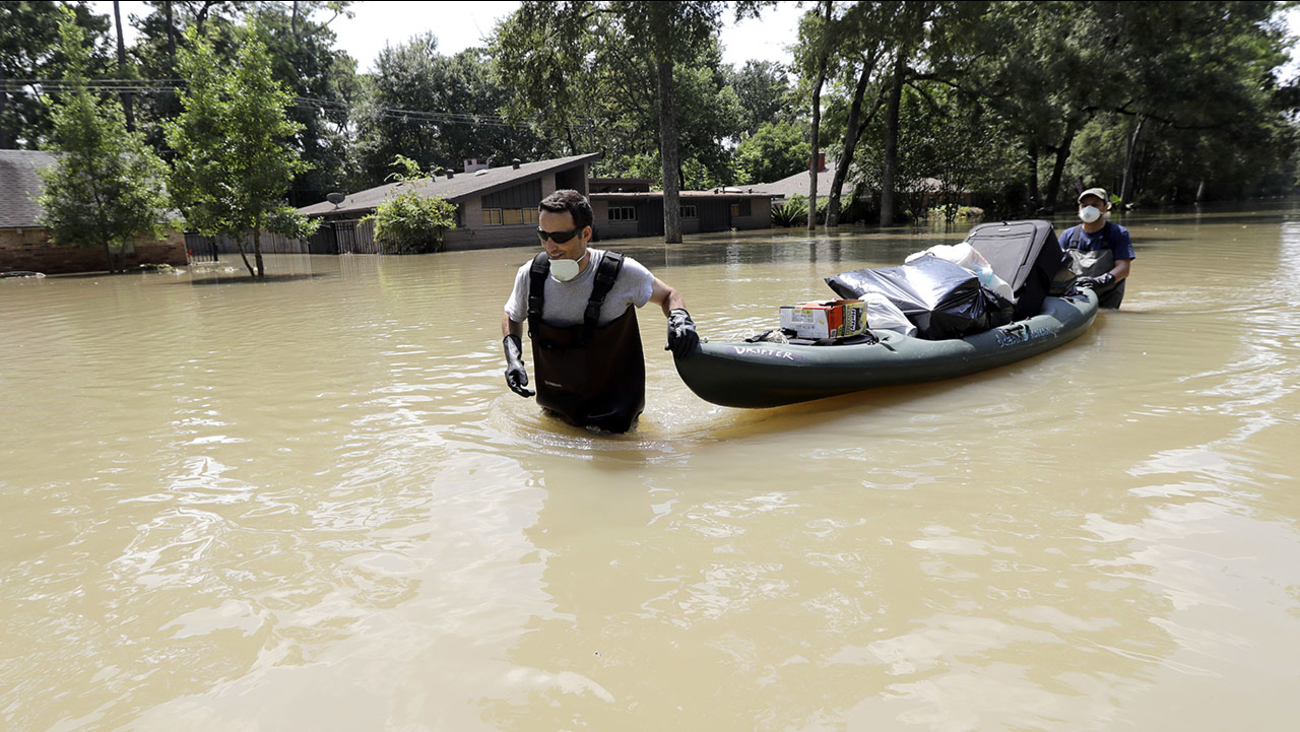 Gaston Kirby, left, is helped by friend Juan Minutella after gathering the last of his belongings from his flooded home in the aftermath of Hurricane Harvey Monday in Houston. (David J. Phillip)

WASHINGTON -- The Senate on Thursday overwhelmingly backed a $15.3 billion aid package for victims of Harvey, nearly doubling President Donald Trump's emergency request, and adding a deal between Trump and Democrats to increase America's borrowing authority and fund the government.

The 80-17 vote sends the massive package to the House for a Friday vote, with emergency accounts running out of money and Hurricane Irma barreling toward the East Coast. Trump is expected to sign the measure.

The must-do legislation would provide money to government agencies through Dec. 8, eliminating the threat of a government shutdown when the new fiscal year starts next month.

The need to raise the debt limit to ease a looming cash crunch that is worsening because of unanticipated Harvey spending was a major headache for GOP leaders like House Speaker Paul Ryan, R-Wis., who had urged a longer extension to spare Republicans multiple votes ahead of next year's midterm elections.

GOP leaders are fuming, but Ryan backed the idea on Thursday, telling reporters that the president didn't want to have "some partisan fight in the middle of the response."

The aid money comes as Harvey recovery efforts are draining federal disaster aid coffers and Irma is taking aim at Florida. It's just the first installment on a recovery and rebuilding package for the twin hurricanes that could eclipse the more than $110 billion cost to taxpayers of Hurricane Katrina.

In a surprise move late Wednesday, Senate Majority Leader Mitch McConnell added $7.4 billion in rebuilding funding to Trump's $7.9 billion request to deal with the immediate emergency in Texas and parts of Louisiana.

"It will provide certainty and stability for first responders, state officials, and the many others involved in preparing for and recovering from these storms, with critically needed emergency resources that will not be interrupted by the prospect of a shutdown or default," McConnell said Thursday. "The recovery effort for a record-setting storm like Harvey has strained resources to the limit already."

McConnell also added a temporary extension of the federal flood insurance program, which otherwise would have expired at the end of the month.

"This funding will serve as an initial first step toward helping Texans begin the process of rebuilding," said Sen. John Cornyn, R-Texas, who requested the additional funding be adding to the measure.

The $15 billion-plus aid package is also crafted in such a way to free up another $7 billion in Federal Emergency Management Agency disaster relief funds.

Trump's move is galling to many GOP conservatives. Pelosi used a Thursday news conference to take a victory lap, telling reporters that her deal with Trump ensured that Democrats would have leverage during upcoming Washington debates this fall on health care, government spending, and immigration.

Just before the final vote, the Senate easily voted 87-10 to kill a move by Sen. Rand Paul, R-Ky., to pay for the aid package by cutting foreign aid accounts.

"Why don't we pay for this? Why don't we simply take some money that we were going to spend somewhere else for something not as valuable in another country, and why don't we spend it here?" Paul said.

Sen. Ben Sasse, R-Neb., fared only slightly better in losing a 72-25 vote to kill a bid to remove the debt limit language and all spending above Trump's request.

"Do your constituents know that we're using the hurricane as an excuse to extend the debt ceiling?" Sasse said. "We can't pay our credit card bill, so we're just going to take over the credit card company and change our credit limit without any discussion."

Earlier he railed against the deal between the Republican president and Democrats.

In the meeting with Republican and Democratic leaders on Wednesday, Trump also suggested doing away with the debt ceiling entirely.

Pelosi and Schumer indicated that it was an issue they would discuss with their respective rank and file.