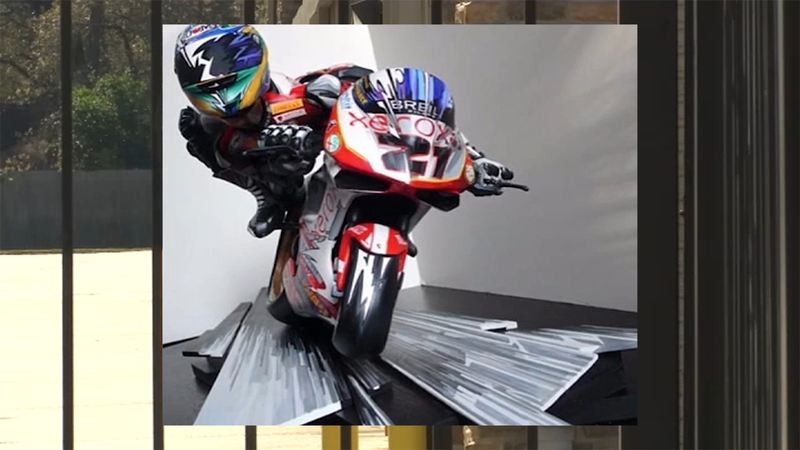 Hunt continues for stolen sculpture worth $11,000

KINGWOOD, Texas (KTRK) -- A rare sculpture worth thousands of dollars was stolen from a storage unit in Kingwood, according to its owner, and despite losing it a year and a half ago, he's not giving up.

"I was just gutted," said James Reagan, who was in Houston on Christmas Eve visiting his sister from Brazil. She was the one who first broke the news to him.

"She gave me a call and said, 'I've got some bad news: Your unit has been broken into,'" recalled Reagan.

He said the rare and unique sculpture cost him $11,000 and had been tucked away inside a Kingwood storage unit for a year. He said the colorful statue is one of only five that were made.

"It's something that if you've seen it, you're going to remember it," said Reagan.

Reagan calls himself a 'fanatic' of the Ducati motorcycle brand. He had amassed a collection of parts, bikes and artwork which was all stored inside two units. Reagan's sister lives in Houston so he decided to ship his beloved items and store them in the area. He said sometime after, her car was broken into.

"[They got a hold of] the address to the facility, the keys had the number on it and the code to get in the building," recalled Reagan. "They took everything. I think it was purely weight and size that they couldn't lift the bikes, so they didn't take the bikes."

He told ABC13 he believes if the thieves had more than a year to resell the statue, someone may have spotted it and might know where it is.

ABC13 saw security footage and the video shows the thieves, but their faces were covered.

Police say they've busted a sophisticated group of criminals using social media to find their victims, and when they can strike.