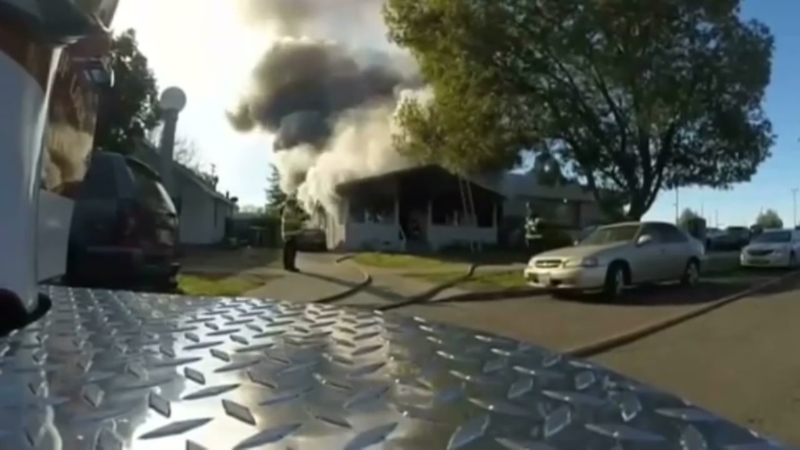 LODI, Calif. -- Before the fire department made it to a burning home, two men were in the neighborhood delivering water.

"Saw smoke coming out of the window and I said to my co-worker, Jorge, I think that house is on fire," Scott Batres told KTXL.

Batres says he saw the smoke getting thicker, heard the windows shattering in the flames and then heard something absolutely awful.

"Scott came up next to me and said there's people screaming in there," said Jorge Macias, Jr. "Thats when I ran up in there again and I told them to listen to the sound of my voice."

Surveillance video shows him running toward flames into the burning home.

In the next few moments, the people inside did listen to his voice. First, a badly burned teenager emerged within the smoke.

Macias says he pulled her from the floor to the front yard.

"Then I looked down again where she fell and thats when I saw the baby face up and trying to catch her breath," said Macias. "Then I told Scott I have a baby, I have a baby."

Batres cradled the burned baby in his arms, taking her to safety.

"Her hands were burned, her face was burned right here," said Batres.

Scott carries the baby in one arm and uses his other to roll this dolly loaded with water to safety too.

Both men say there's another parent whose courage rose above the chaos.

They say the children's mother guided them through the smoke and into their helping hands.

"To remember to grab her baby and to get her even though she couldnt breathe herself, you gotta give her credit for being as brave as she was," said Batres.