Why this plaque could be aliens' first glimpse at humankind 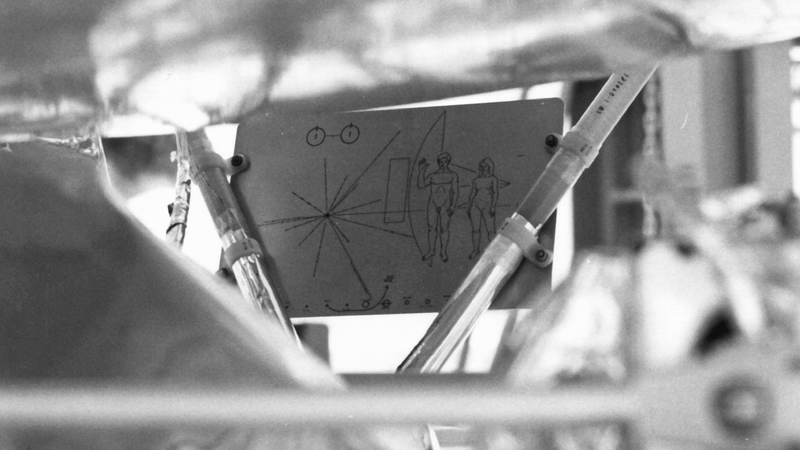 Why this plaque could be aliens' first glimpse at humans

As scientists search for life beyond Earth, they've had to consider some interesting questions: what will our first interaction with an alien life form look like? Will those aliens be capable of sensing and communicating? What message do we want to send?

When NASA launched the Pioneer 10 spacecraft in 1972, astronomers attempted to shape our first contact with an alien life form by affixing a small aluminum plaque to the probe. The plaque, which is a mere six inches tall, is inscribed with illustrations that give a glimpse of our civilization.

A nude male and female figure offer whatever is out in space a look at the human form. Next to the earthlings sits an illustration showing Earth's relative position to the sun, and a drawing of the solar system showing Pioneer and its intended trajectory.

The plaque also references hydrogen, which is often called the element of life due to its presence in water and many organic compounds found all over our planet.

Five years later, NASA further refined the idea of the Pioneer plaque with the Golden Record, which set sail aboard both Voyager spacecraft. The Golden Record, however, included not only photos but also sounds representing humankind. Everything from animal noises to rock music is floating through the cosmos just waiting to be discovered.

Of course, the idea of a time capsule of sorts is not without its detractors. A hypothetical alien civilization might not communicate through sights and sounds like humans do, rendering the plaque essentially useless.

In the case of the Golden Record, even if other life forms can see and hear, they might not have the technology that would allow them to listen to the record.

Some scientists have also pointed out that radio signals travel much more quickly than a physical spacecraft, so we may have already made contact with an extraterrestrial civilization in the form of our radio broadcasts without even knowing!